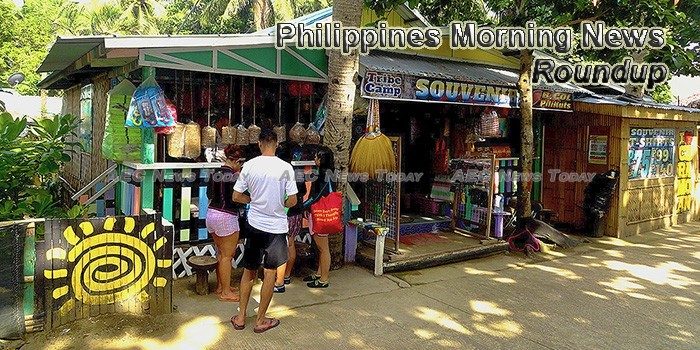 Philippines: HIV cases up 3,147 percent in 10 years
New HIV cases continued to increase in the Philippines in 2017, with a 3,147 percent surge since 2007, according to an Al Jazeera analysis of the latest data published by the country’s health agency, bucking a downward trend worldwide.
— Al Jazeera

Philippines: Risks Rising With China Challenging US at Sea
The risks of a “miscalculation” and armed conflict have risen in the disputed South China Sea with a militarily stronger China now able to challenge the United States, which used to be the dominant power in the strategic waterway, the Philippine envoy to Beijing said Monday.
— VOA

Philippines’ Duterte plays down China military facilities in disputed sea
Philippine President Rodrigo Duterte sought on Monday (Feb 19) to allay fears about China’s construction of military bases on manmade islands in the South China Sea, saying these were built to defend against America rather than confront neighbouring states.
— Channel NewsAsia

Military prepares a list of NPA’s supporters to be arrested
Government officials who are helping the New People’s Army (NPA) face arrests once the Communist Party of the Philippines is declared a terrorist organization by the court, according to The Manila Times Online report on Monday.
— Thai PBS

Duterte not diluting EO on contractualization
The Department of Labor and Employment (DOLE) on Monday allayed fears of labor groups that the new executive order (EO) on contractualization to be signed by President Duterte will be a “watered-down version” of the draft they submitted.
— BusinessMirror

Duterte jokes about making PH a ‘province’ of China
President Rodrigo Duterte joked about making the Philippines a province of China, at an event attended by Filipino-Chinese businessmen on Monday.
— ABS-CBN News

Hong Kong tourist dies after being hit by boat at Philippine dive spot
Hong Kong’s Immigration Department confirmed on Sunday that the man was surnamed Young, and said it would continue to liaise closely with his family and relevant authorities to follow up on the incident.
— South China Morning Post

Philippines launches hearing into CMS procurement
The Philippines Senate started a public inquiry on 19 February into the government’s acquisition of the combat management system (CMS) to be integrated onto two frigates on order from South Korean shipyard Hyundai Heavy Industries (HHI).
— Janes

Southeast Asian lawmakers’ group calls for de Lima release
The ASEAN Parliamentarians for Human Rights called for the immediate and unconditional release of Sen. Leila de Lima, one of the most outspoken critics of President Rodrigo Duterte’s administration.
— Philstar

PH on the threshold of manufacturing resurgence
The opening of the country’s biggest stamping and welding facility of Mitsubishi Motors Philippines Corp. (MMPC) last week signaled the government’s determination to give the local manufacturing sector the much-needed push to accelerate growth.
— Manila Bulletin