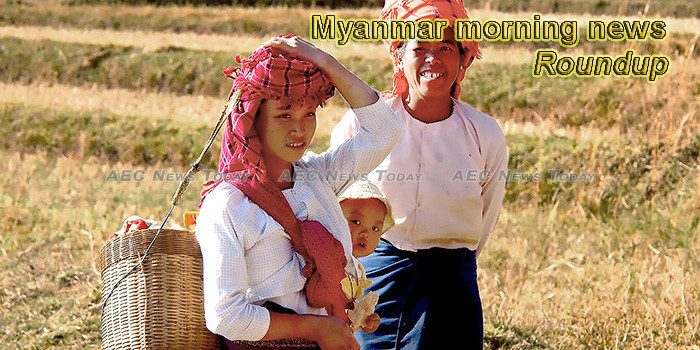 Country’s first solar power plant to start operations in Magwe
The power plant, in Minbu township, Magwe Region, is expected to produce 40 megawatts initially but will produce 170MW once fully operational, according to U Maung Maung Kyaw.
— Myanmar Times

A Genocide Incited on Facebook, With Posts From Myanmar’s Military
They posed as fans of pop stars and national heroes as they flooded Facebook with their hatred.
— The New York Times

Yangon pro-military rally draws thousands as Wirathu hits back at UN
A pro-military rally in Yangon on Sunday drew thousands of supporters who condemned the international community for calls to bring Myanmar’s generals to justice, while nationalist monk U Wirathu gave his first major public speech since being barred from delivering sermons last year.
— Frontier Myanmar

Rohingya: ‘Better to kill us in India than deport us to Myanmar’
The Indian government will send these forms to the Myanmar embassy and then we will be deported forcibly.”
— Aljazzera

Volvo builds foundations for growth in Myanmar
As Myanmar’s economy opens up, international car brands are increasingly looking to the country’s potential as a promising market.
— Myanmar Times

DPNS statement says there are two administrations in Myanmar
A statement from the Democratic Party for a New Society (DPNS) issued on October 14 says liberty, democracy and human rights have not yet progressed as expected and it as if there were two administrations under the National League for Democracy (NLD) government.
— Mizzima

Trade deficit narrows during April-September period
Myanmar’s trade volumes totaled US$18 billion between April and September, the interim period between the end of 2017-18 and the new 2018-19 fiscal year, which commenced October 1, according to the Ministry of Commerce (MOC).
— Myanmar Times

Myanmar: Drop charges against three Kachin activists
Myanmar authorities must immediately drop defamation charges against three Kachin activists who led a peaceful rally in Myitkyina, the capital of Kachin State, where they called for humanitarian access to thousands of displaced civilians and for an end to the armed conflicts in northern Myanmar.
— ReliefWeb

Myanmar coach appreciates his team’s performance despite loss to Bolivia
The head coach of Myanmar football team, Antoine Hey has expressed his appreciation for the efforts and performance by his team players despite its loss to the first-ever visiting team from South America last weekend.
— Myanmar Times

Trilateral peace talks kick off in Myanmar’s capital
Myanmar’s State Counselor Aung San Suu Kyi on Monday called for joint efforts to overcome difficulties and challenges in implementing the nationwide ceasefire accord (NCA) between the government and the NCA-signatory ethnic armed organizations (EAOs) through discussion and negotiation.
— Xinhuanet

Domestic airlines will not raise airfares yet despite rising fuel prices
“We haven’t increased our fares even though fuel costs have risen. We have no plans to change the air fares now because we are trying to attract more travelers,” Daw Aye Mra Tha, general manager of Air Kanbawza (Air KBZ) told The Myanmar Times. Air KBZ operates flights to 11 domestic destination using six ATR-72 aircraft.
— Myanmar Times

Broken transmission line shuts down national power grid
A broken high-voltage transmission line in central Myanmar shut down the national grid this morning, the Ministry of Electricity and Energy has confirmed.
— Frontier Myanmar

Challenging mountain bike rally held in Mandalay
Fans of off-road cycling enjoyed a rare treat of an epic mountain bike competition on Sunday organised by the Mandalay Free Riders off-road bicycling group and supported by the Ministry of Health and Sports and the Myanmar Cycling Federation.
— Myanmar Times

Death of the Controversial Myaing Gyi Ngu Monk
The Myaing Gyi Ngu Sayadaw, a respected ethnic Karen Buddhist monk known locally as U Thuzana, passed away on Saturday at the age of 71 in a hospital in Bangkok, Thailand according to sources from Karen State.
— The Irrawaddy

Asean has to stand up and be counted on Myanmar
When Asean was formed on Aug 8, 1967, no one gave it much of a chance. Asean (Association of South-east Asian Nations), after all, was built on the basis of ASA and Maphilindo, both of which had failed.
— MalaysiaKini