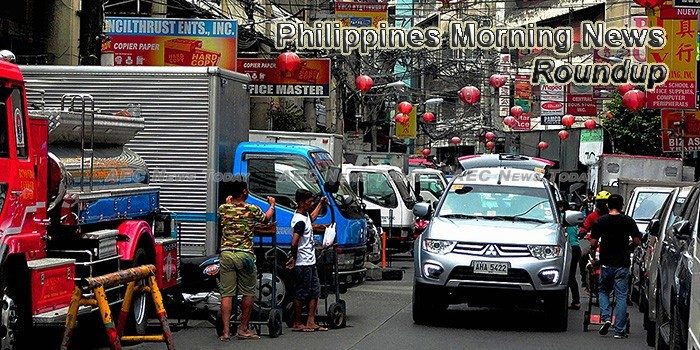 China, Philippines discuss joint oil and gas projects in South China Sea
A second bilateral meeting between China and the Philippines on their territorial dispute in the South China Sea appears to have centered on cooperation rather than on competition, according to a joint press statement Tuesday night.
— Nikkei Asian Review

Philippines should do a US and withdraw from ICC
The United States, known worldwide for its advocacy of liberal dogmas such as human rights, shocked the world in 2002 when it withdrew from the International Criminal Court. One of the reasons for its withdrawal was the fear that the ICC would become a forum for politicized prosecutions of US citizens.
— Manila Bulletin

PHL on track to hit $122-billion exports target by 2022–DTI
Electronics exports skyrocketed to a record-high $32.7 billion last year, pumping more than half of the country’s merchandise exports that increased to $62.87 billion for a growth rate of 9.53 percent
— BusinessMirror

Bangsamoro Peace Process Complicated by Philippine Politics
Despite Duterte’s drams of federalism, the establishment of a Bangsamoro Autonomous Region has stalled.
— The Diplomat

Philippine claim on Sabah will undermine regional security efforts
During the Philippines’ Consultative Committee, former senator Aquilino Pimentel Jr declared the Philippines should assert its ‘claim to Sabah’ under international law. The committee was formed to review and propose amendments to the country’s 1987 constitution.
— Global Risk Insight

Philippines leads SE Asia in budget transparency
The Philippines advanced for the third straight time in a biennial ranking of countries where the public has the most access to government budget information, results of the study released Tuesday showed.
— ABS-CBN News

Liberals dump exec who fostered Philippines helicopter deal
The Trudeau government has appointed a new chair of the Crown corporation that facilitated a controversial helicopter deal with the Philippines, and ordered the organization to become less reliant on selling arms.
— Global News

Cash remittances seen rising in Dec
Remittance growth likely accelerated in December but the full-year expansion will be slower from a year ago, banking giant HSBC said ahead of the release of official data.
— The Manila Times

Senate passes bill for Road Board abolition
The measure that would abolish the graft-ridden Road Board hurdled the Senate on Monday.
Voting 18-0, senators have agreed to approve on third and final reading Senate Bill 1620 which would abolish the Road Board and transfer the management of the road users’ tax to the Department of Public Works and Highways (DPWH) and the Department of Transportation (DOTr).
— Manila Bulletin

PH lifts ban on entry of Belgium poultry products
The country is now allowing the entry of domestic and wild birds and their products from Belgium after the areas in the country that were earlier exposed to bird flu have already been cleared from the virus.
— Manila Bulletin