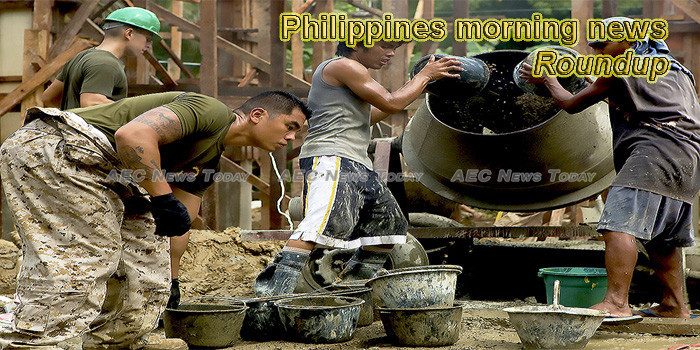 Japan gives $89-K grant for museum
THE Japanese Government will be granting US$89,260 to the Philippine Nikkei-Jin Kai, Inc. (PNJK) for the refurbishment and upkeep of the Philippine-Japan Historical Museum in Calinan, Davao City.
— Sun Star

Inflation to finally start slowing – poll
INFLATION likely slowed in November with economists polled by The Manila Times pointing to cheaper fuel and rice, among others, as having helped snap a 10-month run of elevated consumer prices.
— The Manila Times

Manila FAME trade show generates $4.81 M sales
The Philippines generated $4.81 million worth of export sales from Manila FAME, the premiere trade show for design and lifestyle, down from its $7.2 million target.
— The Philippine Star

DOF pushes bank secrecy in tandem with tax amnesty
THE proposed tax amnesty measure can only be efficiently implemented if the provision on lifting the bank secrecy law as proposed by the Duterte administration is included, the Department of Finance (DOF) has said.
— Business Mirror

Banks pay P6 B penalties for failure to meet agri-agra thresholds
Banks have paid about P6 billion in penalties over the last two years for falling short of the mandated lending thresholds for agriculture and agrarian reform, a member of the central bank’s Monetary Board said.
— The Philippine Star

ECoP President Donald Dee passes away, 72
BUSINESS LEADER Donald G. Dee, president of the Employers Confederation of the Philippines (ECoP) as well as honorary chairman and chief operating officer of the Philippine Chamber of Commerce and Industry (PCCI), died on Saturday at the age of 72, according to notices both chambers posted on their social media sites.
— BusinessWorld Online

Ozamiz Airport starts P637-M upgrade
The Department of Transportation (DOTr) has commenced with the P637-million upgrade and expansion of the Ozamiz Airport in Misamis Occidental.
— The Philippine Star

Answer plea vs 3rd telco bidding, SC orders government shares
The Supreme Court (SC) has ordered the government to answer the petition of a disqualified bidder that could stop the awarding of the third telecommunications slot to Mindanao Islamic Telephone Co. (Mislatel).
— The Philippine Star

Boracay closure prompts DOT to rework tourism goals
FOREIGN arrivals targets under the National Tourism Development Plan (NTDP) will likely be scaled down in the wake of the closure of Boracay Island this year.
— Business Mirror

Philippine Officials: Some Muslim Rebel Groups in South Still Use Child Fighters
Deep inside a Moro Islamic Liberation Front jungle encampment in the southern Philippines, veteran fighter Abdul Campong leads a patrol against possible attacks by saboteurs opposed to a peace deal that his group signed with Manila four years ago.
— Benar News

Philippines: journalist Maria Ressa to turn herself in after police issue warrant
Maria Ressa, the editor of Philippine online news website Rappler, will turn herself into the authorities on Monday after a warrant was issued for her arrest.
— The Guardian

4 accused in P3-B investment scam get 368-year prison term
Four members of a criminal syndicate have each been sentenced to up to 368 years in prison for operating a get-rich-quick scheme that defrauded their victims of some P3 billion nearly two decades ago.
— Philippine Daily Inquirer

Meralco to roll out 1-M prepaid meters
The Manila Electric Co. (Meralco) is rolling out a million prepaid meters once it gets the green light from regulators to cope with growing demand.
— The Philippine Star