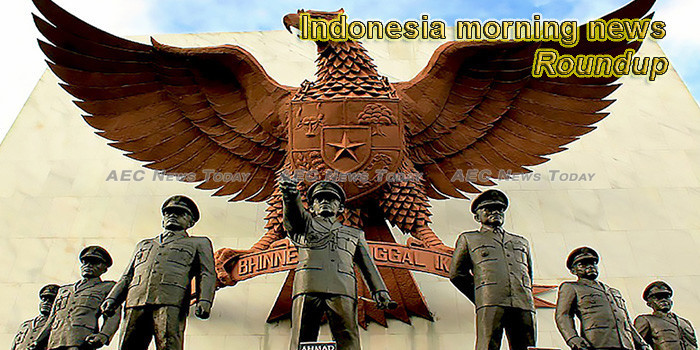 Telkom to hand out Rp 16.2T in dividends
Publicly listed telecommunications company PT Telkom Indonesia has announced that it will disburse Rp 16.23 trillion (US$1.13 billion) in dividends, the largest amount disbursed in the last four years.
— The Jakarta Post

New campaign from Indonesian telecom firm Tri encourages youth to ‘Bring It On’
Indonesian independent agency Pantarei has created a campaign called ‘Siapa Takut’ [Bring It On] for one of the country’s leading telecom operators 3 (Tri).
— Mumbrella Asia

Indonesia’s Model Election Ends in Belated Violence
It was a sad end to a remarkably well run and peaceful election involving 190 million eligible voters spread over 17,000 islands for a multitude of posts ranging from president to legislators and city and local officials.
— Asia Sentinel

Flights back on schedule, day after volcano on Bali erupts
A volcano erupted on the Indonesian holiday island of Bali, causing some overnight flight cancellations to and from Australia as an ash cloud rose into the sky, officials said yesterday.
— The Straits Times (annoying popups)

Ministry to sanction social media operators not deleting hoaxes
The Communication and Informatics Ministry will impose sanctions on social media and web operators who do not delete hoaxes on their pages.
— Antara News

Govt ends social media restrictions on Saturday
The Indonesian Communication and Informatics Ministry on Saturday announced at 1 p.m. that the government had removed restrictions on access to social media imposed since May 22, 2019, when violence broke out during a demonstration held following the General Election Commission (KPU) ‘s announcement on the results of the presidential election.
— Antara News

Indonesia protest: Calls for investigation into police violence
They say they were restrained, doing only what they had to, but Amnesty International says they ‘treated everyone violently’.
— Al Jazeera

BMKG: Extreme Weather to Take Place during Idul Fitri Holidays
According to the Meteorology, Climatology and Geophysics Agency (BMKG) the upcoming Idul Fitri holidays will coincide with early phase of the dry season.
— Indonesia Expat

Bali flights resume after Mount Agung volcano eruption
Flights in and out of the Indonesian resort island of Bali have returned to normal after a volcanic eruption caused delays and cancellations on Friday night (May 24).
— The Straits Times (annoying popups)

Police form fact finding team over teen deaths during May 22 rally
The Indonesian Police have created a fact finding team to investigate the deaths of teenagers during a clash between demonstrators and police officers during a rally held following the announcement of the election results by the General Election Commission (KPU).
— Antara News

Former Indonesian first lady concerns with current situation
Former First Lady Hj Shinta Nuriyah said she was concerned with the current situation in Indonesia, and urged the entire nation to maintain unity in diversity because it was a pillar of the Unitary State of the Republic of …
— Antara News

Freelance workers seek acknowledgment from factories
Daily at 1 p.m. WIB, freelance worker Muhayati receives ten dozen baby gloves and socks to be sewn and handed to collectors at the same time next day when she gets another consignment.
— Antara News

NMAA Confident Modification Industry as Large as Japanese Market
The National Modificator Aftermarket Association (NMAA) believes that the Indonesian car modification market can be as large as markets in Japan and the United States if all automotive elements are united and support each other in developing a growing vehicle industry.
— Tempo.co

Indonesia’s worst political violence in two decades brings out the comically absurd
A shoe salesman setting up shop on the side of the road in central Jakarta as gangs wielding sticks and stones marched past him towards the police barricades, with ambulances whizzing past, sirens blaring, ferrying the wounded to hospital.
— ABC News

Again, reconciliation in dire need among Indonesia’s elites
The deaths of eight civilians and injuries sustained by several hundreds in Jakarta’s post-election riots that occurred on May 21 and May 22 have become a tragedy of humanity during the fasting month of Ramadan.
— Antara News

Is Indonesia the new tiger of Southeast Asia?
The last few years have seen an explosive rise in Indonesia’s internet economy. In addition to ecommerce, online gaming, advertising, subscription music and video, as well as online travel and ride-hailing/food delivery services are all enjoying eager adoption from …
— Intellasia

Jakarta riot: Police violence in spotlight after viral beating video
A viral video showing an unarmed man being repeatedly beaten with sticks by riot police officers in a parking lot near Al Huda Mosque in Kampung Bali, Tanah Abang, Central Jakarta, has put the issue of police violence in the spotlight.
— The Jakarta Post

Indonesian Ombudsman asks HKBP Filadelfia to accept church relocation plan
SharesMembers of the Filadelfia Congregation of Batak Protestant Churches (HKBP Filadelfia) in Bekasi regency, West Java, have been seeking access to their church and government protection from those they say are intolerant since 2009.
— The Jakarta Post

Exclusive: The Aussie woman on a mission to help Bali’s ‘un-adoptable dogs”
Graphic designer Prue Barber made a special promise to a dying street dog she found one day in her adopted home of Bali.
— 9 News