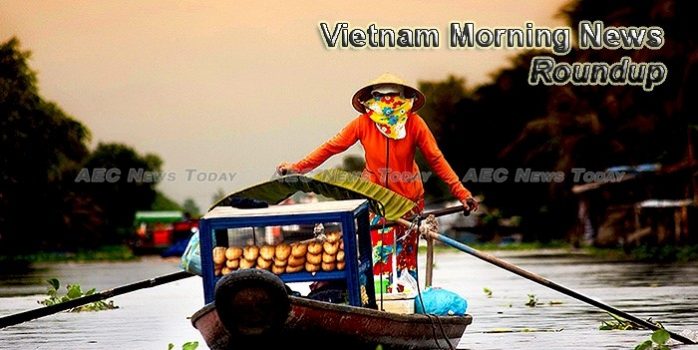 VN’s first import-export report released
A report on imports and exports in 2016 was officially launched for the first time yesterday in Hà Nội, with an aim to successfully implement the import-export strategy in the 2011-20 period with a vision to 2030.
— Viet Nam News

FDI to Ho Chi Minh City increases by 56.7 percent in Q1
Ho Chi Minh City attracted 574.71 million USD in foreign direct investment (FDI) in the first quarter of 2017, a year-on-year increase of 56.7 percent, according to the municipal Department of Planning and Investment.
— Vietnam Plus

Vietnamese economy sees slower Q1 growth
Việt Nam posted a year-on-year GDP growth of 5.1 per cent in the first quarter of 2017, slower than the previous two years at 5.48 and 6.12 per cent, respectively.
— Viet Nam News

Multi-million dollar live-chat services expected to see big investments
The demand for live chat in Vietnam has increased by 30 percent in the last two years, raising the market value to $20 million.
— VietNamNet Bridge

Vietnam and Taiwan Spar over South China Sea
Taiwan has been engaging in military drills this week around Taiping Island, its major foothold in the South China Sea—and Vietnam is having none of it. Reuters:
— The American Interest

Vietnam, Japan ink MOU on tourism promotion
A MEMORANDUM of understanding aiming at promoting tourism initiatives and encouraging visitor exchange was signed |by Vietnam and Japan on Wednesday.
— The Nation

Asia Coffee-Prices fall in Indonesia on harvest; Vietnam exports seen lower
A small harvest in Indonesia dragged prices of coffee beans down, while the market in Vietnam remained quiet amid low supply and thin stockpile, traders said on Thursday.
— The Times Of India Business

Thanh Cong, Hyundai Motor join hands to produce automobiles
Thanh Cong Group on March 30 signed a cooperation agreement with the Republic of Korea’s Hyundai Motor Company on forming a venture to expand the assembling of automobiles in Vietnam.
— Vietnam Plus

Vietnam export import report announced for first time
Vietnam’s export import turnover in 2016 reached US$349.16 billion, of which export posted a year on year increase of 8.6 percent to hit $175.9 billion, reported the Ministry of Industry and Trade.
— Saigon

Vietnam jails journalist for blackmail
A former newspaper reporter in the central Vietnamese city of Da Nang has been sentenced to 15 months behind bars for blackmailing a local resident.
— Tuoi Tre News

Banks cautious about business targets in 2017
The season of annual shareholders meeting will begin next month and commercial banks have been cautious while setting business targets for this year in the context of slow bad debt settlement and high risk provision, Dau tu chung khoan (Securities Investment) newspaper reported.
— VietNamNet Bridge

Capitalism: Hot Flight Attendants In Bikinis Made Vietnam Its First Female Billionaire
Airlines all have their own uniforms for flight attendants, but those uniforms were never a reason customers choose to fly a particular airline…until now. VietJet, a regional airline in Vietnam, has its young flight attendants dress in corporate colored bikinis, and that marketing gimmick has helped the company’s CEO, Nguyen Thi Phuong Thao, become the country’s first self-made female billionaire.
— Daily Caller