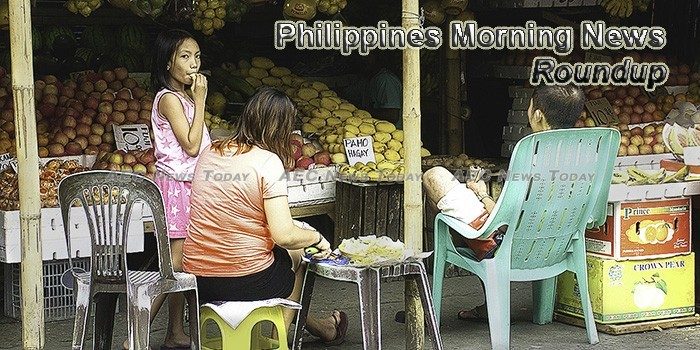 ABS-CBN pumps in P592 million to boost cable, Internet business coverage, capacity
MULTIMEDIA conglomerate ABS-CBN Corp. is pumping in half a million pesos in additional investment in its cable and Internet businesses to expand the latter’s network coverage and capacity.
— Business Mirror

Infra spending jumps 44% to P50 billion in February
The government’s infrastructure expenditures in February jumped by nearly 44 percent to P50.5 billion from a year ago level of P35.1 billion as a result of road project completions and other capital outlays of various agencies, the Department of Budget and Management (DBM) reported yesterday.
— Philippine Star

Foreigners beware in the Philippines
Philippine President Rodrigo Duterte’s repression has entered a dangerous and potentially more damaging phase as he aims to block foreign scrutiny of his policies and rule.
— Asia Times

Philippines looks beyond China for public works
The Philippines wants a balanced diet of aid for its massive infrastructure push, a key official told Nikkei, aiming to avoid an unhealthy dependence on a China moving to deepen its involvement in infrastructure throughout Southeast Asia.
— Nikkei Asian Review (metered paywall)

DENR gives 75 business owners in Coron a month to remove illegal structures
The Department of Environment and Natural Resources (DENR) on Thursday, April 19, started serving eviction notices to 75 business owners in Coron town, and gave them 30 days to remove and self-demolish their structures built on the waters and within the easement zones.
— Rappler

EU Parliament calls for end to EJKs in Philippines
The European Parliament adopted a resolution calling on the Philippines to end extrajudicial killings in its anti-drug campaign, release detained Senator Leila de Lima, and drop human rights defenders from its list of terrorists.
— Philippines Magazine

8 major bridges linking Visayas, Luzon in the works
The Duterte administration plans to build eight major bridges with an estimated total cost of PHP269.19 billion to connect the islands of the Visayas and link them to Luzon, as part of the government’s massive infrastructure buildup and to create more jobs outside Metro Manila, Finance Secretary Carlos Dominguez III said.
— Philippine News Agency

Laymen running in village polls must quit from church duties
The Diocese of Cubao has reminded officials and members of any church organization that they should resign from their positions if they will run in the May 14 Barangay and Sangguniang Kabataan (SK) elections.
— Philippine Canadian Inquirer

Why the New US-Philippines Military Pact’s First Project Launch Matters
The launch of the first EDCA project this week deserves attention amid a challenging context for the U.S.-Philippine alliance in the Duterte era.
— The Diplomat

ICTSI readies expansion of three foreign ports in 2018
Port operator International Container Terminal Services Inc. said it is expanding three of its fastest growing terminals including one in Iraq, as it expects global trade to be “good” this year barring the merchandise war that could break out between China and the US.
— Manila Standard

Gov’t subsidies to GOCCs fall 11%
The national government’s subsidies as of end-February fell by 10.76 percent, with bulk of the amount released to the National Irrigation Administration (NIA).
— Malaya

Cement firm to put up P1B plant in Mariveles
Phinma Corp. expects to put up a P1.2-billion cement terminal in Mariveles, Bataan by next year as it firms up its re-entry into the cement business.
— Malaya

England and Scotland visit Philippines on trade mission
Beef and pork exporting opportunities are being explored as part of a two-day British meat trade mission to the Philippines.
— GlobalMeatnews.com

1,065 farmers from Kalinga, Eastern Samar receive CLOAs
The Department of Agrarian Reform (DAR) announced the distribution of certificate of land ownership awards (CLOAs) to a total of 1,065 farmers in the provinces of Kalinga and Eastern Samar.
— Business Mirror

BPI pumps up tech brawn via P50-B boost
Ayala-led Bank of the Philippine Islands (BPI) plans to use the P50 billion from its upcoming stock rights offering to secure a “technologically strong” and “inclusive” financial backbone in the years ahead.
— Philippine Daily Inquirer

FAME rakes in P7B sales in 5 years
A biannual trade show mounted in the Philippines has generated P6.7 billion in sales between 2012 and 2016, according to Ramon Lopez, secretary of Department of Trade and Industry (DTI).
— Malaya

Comelec reminds candidates: Spend only P5 per voter
A Commission on Elections (Comelec) official has reminded candidates in the upcoming Barangay and Sangguniang Kabataan (SK) elections to stick to the maximum PHP5 expenditure per registered voter, as stipulated in the Fair Elections Act.
— Northbound Philippines

Rice importation to push through amid protests
Rice producer-consumers group Bantay Bigas and Anakpawis staged a protest action on Wednesday in front of the National Food Authority (NFA) office in Quezon City, as it assailed the government for letting the depletion of the country’s affordable rice stocks happen and for its continued reliance to importation.
— Davao Today

PSEi closes above 7,600
The Philippine Stock Exchange Index suffered its biggest drop since January 2016 but quickly pared those sharp gains before the closing bell.
— ABS-CBN (video)