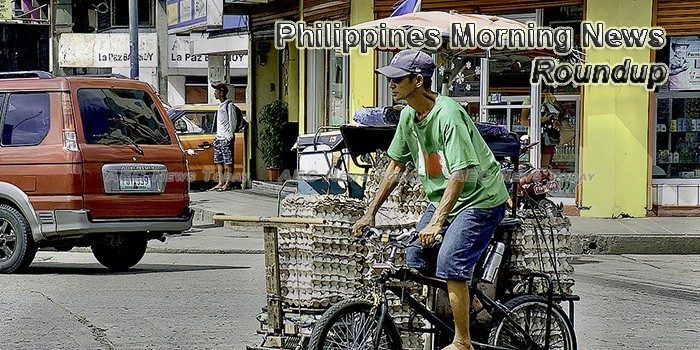 Duterte earmarks P2-billion for Boracay under state of calamity, junks casino
PRESIDENT Rodrigo Duterte said he would place Boracay Island under a state of calamity to release P2 billion in calamity funds for workers and residents hurt by the six-month closure, adding he would not also allow any casino to be built in the world-famous beach resort despite the approval from the Philippine Amusement and Gaming Corp.
— Manila Standard

Measles incidence–up 3,600%–could turn epidemic without vaccinations
Because of the Dengvaxia controversy, which has caused an exaggerated fear of the potential adverse effects of vaccinations, the government’s preventive health programs have taken a big hit.
— Philippine Daily Inquirer

Landbank gives FastCat P1.726-billion loan to build 5 ships by next year
AS part of its capital-raising initiative to bankroll its plan to operate 30 vessels by 2020, Archipelago Philippine Ferries Corp. (APFC) has sealed another loan deal worth P1.726 billion with the Land Bank of the Philippines (LandBank) for the construction of five new ships set to be delivered by middle of next year.
— Business Mirror

Philippines eyes exploration deal with China in claimed areas
The Philippines is looking to seal a pact with China within a few months to jointly explore for oil and gas in a part of the busy South China Sea waterway claimed by both countries, a Philippine official said on Monday.
— Bangkok Post

Sugar sustains 5-week hike to P1,440.46/LKg
The average mill-site price of domestic sugar as of March 4 sustained a five-week increment and rose to a crop-year high of P1,440.46 per 50-kilogram bag (LKg), latest data from the Sugar Regulatory Administration (SRA) showed.
— Business Mirror

Duterte banks on China to rebuild war-torn Philippine city of Marawi
China will have a chance to showcase warmer ties with the Philippines if it wins a contract to rebuild a city ravaged by Islamic State in Iraq and Syria-inspired terrorists last year, a Cabinet member said.
— The Straits Times

Duterte urges Congress to ‘fast-track’ impeachment of top judge
Philippine President Rodrigo Duterte has told members of parliament they must “fast-track” the impeachment of the country’s top judge after she hinted that he might be behind the moves to sack her.
— Aljazeera

Diarrhea kills 8, downs 200 in Sulu
Eight persons have died and more than 200 have been affected with diarrhea in three barangays in Pata, Sulu since two weeks ago.
— Philippine Star

Philippines Department of Finance establishing online payment gateway for government transactions
The PHPay system is designed to be a secure and reliable collection system in which government clients can transfer payments online for government services, anytime and anywhere.
— Open Gov

Grab to keep Uber app open until April 15
In compliance with an order from the Philippine Competition Commission (PCC), transport network company (TNC) Grab will keep the Uber app running until April 15 although this will not only defeat the purpose of the order but also put the riding public at risk, according to its officials.
— Philippine Daily Inquirer

More than 600 on list of alleged ‘terrorists’
The United Nations Special Rapporteur for the Rights of Indigenous Peoples believes the government’s move to label her as a terrorist is an act of retaliation after she issued a warning on the effects of martial law in Mindanao.
— ABS-CBN (video)

60 securities deemed Shariah-compliant by Philippine Stock Exchange
THE COMPANIES adhering to the principles of Islamic finance remained intact in the first quarter of 2018, according to the results of a quarterly review published by the bourse.
— BusinessWorld Online

Peso to climb on weak US data
THE PESO is seen to strengthen against the dollar in the first few days of the week due to lukewarm US labor data and escalating trade tensions between the US and China.
— BusinessWorld Online

San Juan to provide housing to public-sector employees
AFTER providing housing to more than 300 informal-settler families, the city government of San Juan will provide affordable housing to the teachers, policemen and those working in city hall through the Pag-IBIG-funded project F. Manalo Housing in Barangay Batis.
— Business Mirror

Inflation expected to peak at over 5%
Rising electricity and transport prices could cause inflation to top 5 percent in July before moderating, Standard Chartered Bank said.
— Philippine Magazine

Duterte wants charter change to ‘avoid accountability’ for EJKs – analyst
President Rodrigo Duterte may not be pushing for an entirely new constitution to shift to a federal system of government, but to allow him to stay in power beyond 2022 and thereby “avoid accountability” for the human rights violations committed during his term.
— Rappler