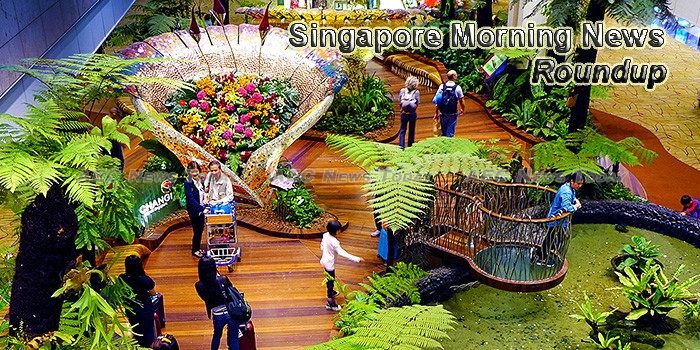 Grab ramps up bid to dominate market
Fresh from raising US$2 billion (S$2.72 billion) to fuel its growth, Grab is ramping up efforts to dominate the ride-hailing market and grow its payments platform.
— Today Online

Singapore committed to long-term ties with Jakarta
Singapore is committed to a long-term relationship with Indonesia, and much has been done by working groups on both sides to ensure that the agenda for the Leaders’ Retreat on Sept. 7 will take bilateral ties forward, said Deputy Prime Minister Teo Chee Hean.
— The Jakarta Post

GrabPay to allow credit transfers between users
By next month, Grab users will be able to transfer GrabPay credits to other users, paving the way for greater uptake of the company’s payments platform, which it ultimately hopes will be used for shopping and other transactions.
— Today Online

Singapore’s only social enterprise Festival For Good returns this Saturday
It may only be Monday but we’ve got one weekend plan already in store for you.
— Asia One

There’s gonna be a week-long GIF festival in Singapore this October, so here are all our GIF reactions
Not many are aware of this, but the Graphics Interchange Format (GIF) — the internet’s favorite medium for reacting to things — is 30 years of age this year.
— Coconuts

Insurance agent gets $4m High Court award
The High Court has awarded $4.026 million to an insurance agent after a scathing letter of reference from a previous employer cost him the chance to join another insurer – Prudential.
— The New Paper

The Global Search for Education: Will Singapore Continue to Lead in 2030?
Singapore has been well publicized as one of the most highly regarded education systems in the world. But does that acclaim exist mainly because of the country’s consistent high placement in international league tables such as the OECD’s Pisa or is there more to this system’s story?
— HuffPost

The lesson of Singapore is not one Brexiteers want to hear
Singapore is cited by many Brexiteers as a model for Britain to follow – a low tax global trading hub with conservative social policies. The small South-East Asian city state has indeed been a success story since it became fully independent in 1965. But, rather than showing its old colonial masters the way, it now has its own challenges to handle.
— The New European

Singapore’s Ezion suspends shares, seeks restructuring
Singapore-based oil services company Ezion Holdings Ltd said trading in its shares would be suspended temporarily, as it is in talks with stakeholders such as bank lenders and creditors about its financing and capitalisation structure.
— The Edge Markets

Japanese tanker and Singapore container ship identified as vessels which collided, leading to Hong Kong palm oil spill
A Japanese-owned chemical tanker and a Singaporean container ship have been identified by the trade press as the two vessels involved in a collision in Chinese waters that led to Hong Kong’s beaches being awash with jelly-like palm oil, South China Morning Post reported on Monday (Aug 14).
— The Straits Times (paywall)

S’pore scientist wins Asean award for research on rice
Singapore might not be a rice-producing country, but that has not stopped it from contributing to research in the field.
— Today Online