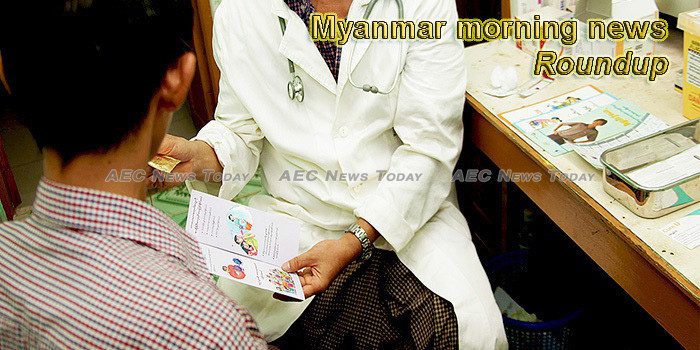 93 Rohingya headed For Malaysia being held at sea by navy in Tanintharyi
Fishermen and police in Tanintharyi Region say the Myanmar Navy detained 93 Rohingya on Sunday night on a boat off the coast of Dawei on their way to Malaysia from the Rakhine State capital of Sittwe.
— The Irrawaddy

PK929 bn to be spent on five-year MS-NPAN
The government will spend K929 billion (US$663 million) on implementing a five-year Multi-Sectoral National Plan of Action for Nutrition (MS-NPAN) from 2018-2019 fiscal year to 2022-2023 FY, according to the first meeting of the National Level Leading Committee
— Eleven Myanmar

Ethnic-group fighting in Shan kills three
Three civilians were killed in clashes among ethnic groups in northern Shan State over the weekend, bringing to five the total number of civilian fatalities since the fighting erupted in late October.
— Myanmar Times

Kachin group accuses Myanmar Army of beating two men suspected of rebel ties
he Kachin Baptist Convention (KBC) is accusing the Myanmar Army of torturing two ethnic Kachin men detained on their way to a football match on Monday in Shan State after suspecting them of ties to a rebel group.
— The Irrawaddy

Hluttaw reviews €70m loan to better Yangon
The Pyidaungsu Hluttaw (bicameral parliament) has postponed the approval of a €70 million (K126 billion) loan from the French Development Agency for urban development in Yangon Region as it needs further review.
— Myanmar Times

Myanmar to host int’l textile, garment expo in Yangon in December
An international textile and garment expo hosted by Myanmar will take place in Myanmar’s largest city Yangon from Dec. 6-9, according to the event organizer Monday.
— The Global Times

Locals invited to invest in Chin State’s copper, chromium mining
Local entrepreneurs have mainly been invited to invest in mining along the valley in eastern part of Chin State adjacent to Sagaing and Magway regions as the area has potential for copper and chromium deposits, said Dr Min Zaw Oo, director of Chin State Directorate of Investment and Company Administration.
— Eleven Myanmar

ACL builds new apron at YIA
Aviation authorities upgraded Apron A and B to accommodate up to 32 aircrafts as well as the terminal buildings at Yangon International Airport (YIA). A new Apron C is under construction, according to Yangon Aerodrome Company Limited (YACL).
— Eleven Media

Myanmar to make electric buses
Modulo electric buses will be manufactured locally under a partnership between No 1 Heavy Industry Enterprise from the Ministry of Industry, Green Power Myanmar Co Ltd, and Csepel Holding Limited of Hungary.
— Myanmar Times

GrabPay sets sights on Cambodia and Myanmar
Southeast Asia’s largest ride-hailing group plans to take its mobile payments service into Cambodia and Myanmar as it expands its range of businesses throughout ASEAN countries, according to a senior executive.
— Nikkei Asian Review