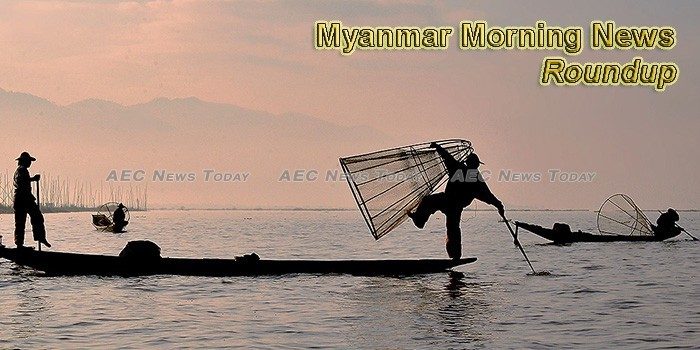 Myanmar to use Intelsat 39 satellite
Myanmar’s Ministry of Transport and Communications (MOTC) has expanded its relationship with satellite operator Intelsat to accelerate the development of the nation’s wireless infrastructure.
— Telecomasia.net

Defense says Myanmar police withheld evidence from Reuters reporters’ phones
Data that could support the defense of two Reuters reporters accused of possessing secret documents in Myanmar was missing from police phone evidence submitted to a court by prosecutors, their lawyers said on Monday.
— Reuters

Singapore Myanmar Investco in share sale agreement to dispose unit for US$10.8m
MAINBOARD-listed Singapore Myanmar Investco (SMI) on Monday announced that its subsidiary, Myanmar Infrastructure Group (MIG), has entered into a US$10.8 million share sale agreement with Tiger Infrastructure for the proposed disposal of its 99.9 per cent-owned indirect subsidiary, TPR Myanmar.
— The Business Times

‘Nowhere people’ long to go home to Myanmar
On Saturday, Norul Amin, a 35-year-old Rohingya Muslim refugee, carried on his shoulder a sack of food relief aid that would feed his family of eight for two weeks in Kutupalong camp in Cox’s Bazar, Bangladesh.
— The Nation

No Viettel roaming fees in Myanmar
Viettel Group will apply new international roaming rates for Myanmar when it launches its Mytel mobile phone network in that country on June 9.
— VIETNAMNET Bridge

Foreign Office refused to back Leeds United Myanmar tour
On April 24, the day the club announced its tour to the south-east Asian country, where the regime has been accused by the United Nations of carrying out ethnic cleansing of Rohingya Muslims, a Leeds United representative telephoned a Foreign Office official and complained about “frustrating” criticism.
— Yorkshire Evening Post

Aid money projects are tax exempted: ministry
All development projects implemented under grants, aids and Official Development Assistance (ODA) loans are exempted from income tax and commercial tax, according to a statement from the Ministry of Planning and Finance in late May.
— The Myanmar Times

Yangon Parliament, Cabinet Still At Odds Over Draft Budget
The Yangon Region Parliament failed to pass a draft 2018-19 budget Monday as debate over the proposed purchase of 10 Ford vehicles and a multi-million dollar investment in Yangon City Bank continued.
— The Irrawaddy

Myanmar Minister calls for earthquake readiness
Union Minister for Social Welfare, Relief and Resettlement U Win Myat Aye said frequent earthquakes in 2018 have become a challenge for Myanmar adding that it should be addressed seriously.
— ANI

Terrorism main cause of violence in Rakhine – U Thaung Tun
Union Minister for the Office of the Union Government and National Security Advisor U Thaung Tun took part in the Asia Security Summit /The IISS Shangri-La Dialogue held in Singapore from 1 to 3 June, 2018.
— Mizzima

How ecotourism at Indawgyi Lake is helping remote communities thrive
Decades of isolation, neglect, and persecution have left the Shan communities on the shores of Indawgyi Lake short on opportunities and at odds with their own environment.
— Coconuts Yangon (metered paywall)