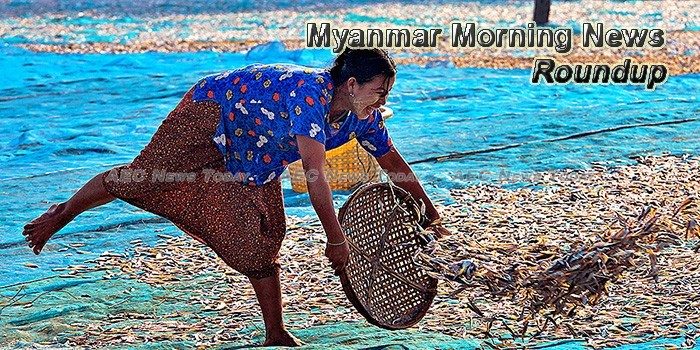 Myanmar Parliament approves $15M for Rakhine border fence
Myanmar’s Parliament has approved a budget of about $15 million for the construction of a fence and related projects along the border with Bangladesh in Rakhine state, from which about 700,000 members of its persecuted ethnic Rohingya minority have fled violence since last August.
— The Borneo Bulletin

Amara pledges 4G broadband lifestyle for Myanmar
GIVEN THE HIGHER data consumption in Myanmar, Amara Communications Co, a locally-owned turnkey solution provider with expertise in telecommunications, has been working around the clock to play a critical role in the nation’s digital transformation with the commercial launch of Ananda, its new 4G+ broadband data service.
— The Nation

‘Everything is gone’: satellite images in Myanmar show dozens of Rohingya villages bulldozed
Myanmar’s government is using bulldozers to erase dozens of villages in Rakhine state in a vast operation that rights groups say is destroying evidence of mass atrocities against the ethnic Rohingya Muslim minority.
— The Guardian

Ninety Percent of Rohingya Population Ejected from Rakhine
At least 90 percent of the Rohingya population of conflict-torn northern Rakhine State has fled to neighboring Bangladesh in the wake of the government’s clearance operations following Muslim militant attacks last year, according to The Irrawaddy’s calculations based on government and INGOs’ statistics.
— The Irrawaddy

Rohingya reflect: Six months since Myanmar exodus
Rohingya refugees in Bangladesh are living day-to-day, six months on since the start of a brutal crackdown by the Myanmar military.
— Al Jazeera

Myanmar: Nationalists disrupt pro-Muslim event
Some 50 nationalists on Sunday disrupted a news conference in Myanmar’s largest city, Yangon, which was organized by a group of Buddhist monks who have been pressing the government to take action against an anti-Muslim monk.
— Anadolu Agency

Rohingya women: Female Nobel laureates highlight Myanmar sexual violence
Three female Laureates have headed to Bangladesh to meet women from Myanmar’s Rohingya Muslim community. The three women aim to raise the profile of the plight of women who were tortured and raped by soldiers.
— Deutsche Welle

The government, the Rakhine crisis and media access
FOREIGN MEDIA coverage of Rakhine State made headlines again this month when the Union government denied a report by the Associated Press about the discovery of mass graves containing civilians and accused the American newsagency of harming the country’s image.
— Frontier Myanmar

Four Rohingya Sentenced to Death for Deadly 2016 Attack in Rakhine
Four Rohingya involved in an attack on a police outpost in northern Rakhine State in October 2016 were sentenced to death on Friday by a special court in the state’s Maungdaw District.
— The Irrawaddy