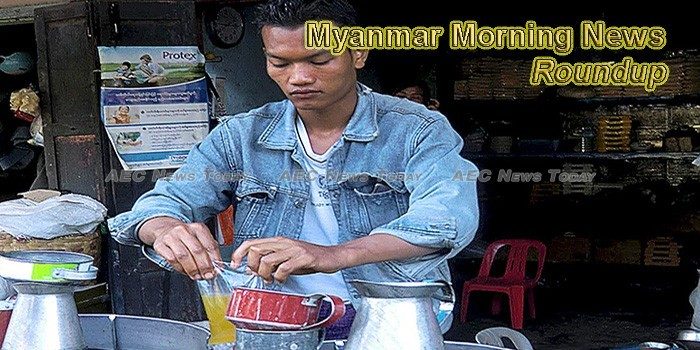 Myanmar tourist industry looks for quick turnaround
DESPITE Myanmar’s tourism business having stalled for more than a year due to religious conflicts in Rakhine State, the nation is making plans to help the industry rebound through accelerating reforms, according to Thet Lwin Toe, chairman of the Union of Myanmar Travel Association (UMTA).
— The Nation

Rohingya Upset UN Agreement Didn’t Address Citizenship
Rohingya Muslim refugees who fled attacks in Myanmar said they were disappointed that a U.N. agreement signed earlier this week did not address one of their key demands: Citizenship.
— Khaosod English

Rubber production to decline next year due to the low price of rubber this year
Rubber production is expected to decline next year because of an unexpected rubber market this year. The manageable-scale rubber farm owners near Thuwannawaddy town, Thaton Township, Mon State have expressed a lack of interest in rubber cultivation because the price of rubber has declined in the market this year, compared with last year.
— The Global Newlight of Myanmar

Is Kyaukphyu in Danger of Slipping Out of Our Hands?
Myanmar State Counselor Daw Aung San Suu Kyi has stated that she wants to reform the country’s education sector. If that is her intention, we must make a serious effort to educate the younger generation about history and geography so that they develop a fuller understanding of Myanmar’s neighboring countries.
— The Irrawaddy

Myanmar-Thai border bust nets 15-tonne
A 15-TONNE batch of sodium cyanide that can be used to make millions of methamphetamine pills was seized and Chiang Rai man was arrested last week when a smuggling operation into Myanmar from Thailand was intercepted.
— The Nation

Over 153,000 foreigners visit Myanmar through Tachilek border in six months
over 153,000 foreigners visited the country while entering through the Tachilek land border in Shan State in eastern Myanmar, and the Mae Sai border on the Thai side, during the current six-month financial year, according to the Ministry of Hotels and Tourism.
— The Global Newlight of Myanmar

Military-linked telecoms operator Mytel launches network
It is unusual for a country’s military leaders to attend the launch of a telecoms company.
— Frontier Myanmar

Myanmar lawyer wins $1.1 million Aurora humanitarian prize
A lawyer from Myanmar who has worked to promote the rights of the country’s persecuted Rohingya minority has been awarded the $1.1-million Aurora Prize for humanitarianism.
— Tampabay

Myanmar meets to establish ‘independent probe’ into Rohingya massacres
A rare “national security” meeting was held on Friday between Myanmar’s army and civilian leadership to discuss an internal investigation into the Rohingya crisis, which saw some 700,000 flee the military-led violence, said the president’s office on Saturday.
— TheNewArab

Sino-Myanmar border trade exceeds $994 million over two months
The border trade between China and Myanmar between 1 April and 1 June during the six-month interim period for the 2018-2019 financial year was valued at US$994 million, up by $94 million compared to that of the same period in the 2017-2018 FY, according to the commerce ministry.
— The Global Newlight of Myanmar