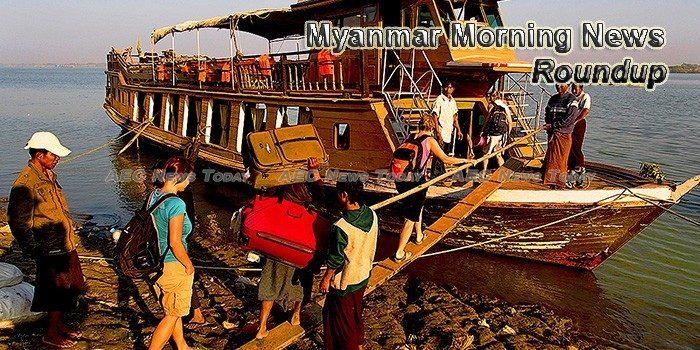 Veteran US Diplomat Quits Myanmar Advisory Panel; Government Says It Asked Him to Go
The Myanmar government on Thursday said it asked veteran U.S. diplomat Bill Richardson to resign from an advisory panel on the Rohingya Muslim crisis in western Myanmar’s Rakhine state because he was pursuing “his own agenda.”
— Radio Free Asia

Following Dam Cancellation, Myanmar Can Lead On Sustainable Energy
I’m in northern Myanmar, being driven to the site of one of the world’s biggest hydropower dam projects of the last decade, slated to generate three times the electricity Hoover Dam can produce at peak power.
— Forbes

Myanmar says Richardson dropped from advisory panel
Richardson said in an interview with Reuters on Wednesday that he was resigning from the board because it was conducting a “whitewash” and accused Myanmar’s leader, Aung San Suu Kyi, of lacking “moral leadership”.
— Reuters

Life interrupted: Myanmar teen pregnancy points to need for comprehensive sexuality education
Every year, almost 50,000 teenage girls in Myanmar give birth, according to data from the 2014 census. Thiri* was one of them. She became pregnant when she was only 15 years old.
— ReliefWeb

Over a 1,000 Kachin war refugees flee from IDP camp
Ndup Yang IDP camp In-charge said that about 1,000 war refugees and local people had to flee from their camp after heavy weapon shells hit the camp in Sumprabum Township, northern Kachin State.
— Mizzima

Rice exports surge despite fraud; but government can still play a bigger role
Despite higher incidences of trading fraud, rice exports are expected to increase in 2018 on the back of demand from China, the largest importer of Myanmar rice, as well as other countries like Bangladesh and Sri Lanka, rice traders said.
— Myanmar Times

Not safe yet for Rohingya return to Myanmar–U.N.
Attacks on Rohingya Muslims appear to be continuing in Myanmar and it is not yet safe for the hundreds of thousands of Rohingya refugees living in Bangladesh to begin returning to their homes, a high-ranking United Nations official said.
— BusinessMirror

Chinese casino scam victims held captive, tortured in Myanmar, says Beijing daily
Scores of Chinese have been lured to Myanmar’s border town of Muse under false pretences and held for ransom after being forced to gamble and some were beaten and tortured, a Beijing newspaper has reported.
— Frontier Myanmar

Rakhine Immigration authorities vow to ‘take action’ on unvetted returnees
The immigration chief of Maungdaw District says authorities will prevent entry of any person deemed to not have resided in Myanmar before the most recent rounds of violence in Rakhine State.
— Frontier Myanmar

Philippines Morning News For May 17