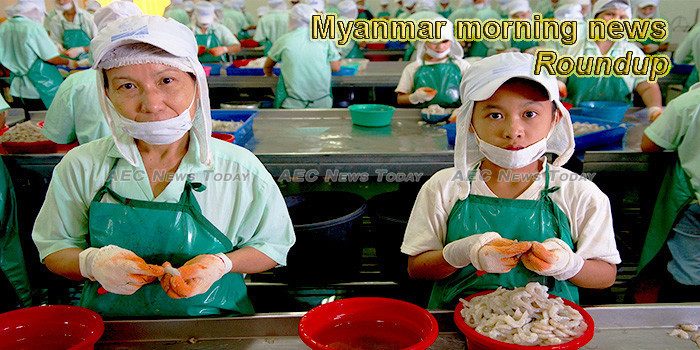 Bipartisan senators call for US ‘genocide’ label of Myanmar killings
A bipartisan group of U.S. senators on Wednesday called on Secretary of State Mike Pompeo to designate the Myanmar military’s campaign against the Rohingya Muslim minority a genocide.
— Channel News Asia

Facebook kicks military-linked pages off platform
Facebook has removed hundreds of pages and accounts with hidden links to Myanmar’s military, the platform said Wednesday, as the company scrambles to respond to criticism over failures to control hate speech and misinformation.
— Frontier Myanmar

ASEAN, Myanmar to formalise cooperation on refugee repatriation
The Association of Southeast Asian Nations (ASEAN) and the government on Tuesday discussed the Terms of Reference (ToR) that will formalise their cooperation in the repatriation of refugees from northern Rakhine State living in cramped camps in Bangladesh.
— The Myanmar Times

Kachin displaced in Myanmar face land loss
La Dee, an internally displaced person (IDP) in Myanmar’s northern Kachin State, did not envisage being dispossessed of his farmlands through changes to land laws. But he and thousands of other displaced people are now afraid that this will happen.
— UCA News

‘Tone from the top’ crucial in anti-corruption: DICA
There is a lack of awareness about the transparency and corporate governance aspects of the new Companies Law, according to a senior government official, who argued for the importance of tone from the top in combating corruption.
— The Myanmar Times

Myanmar’s military in the headlines with 71st air force anniversary
Recent commemoration highlights developments within the service and the country’s wider defense modernization.
— The Diplomat

Questions raised over Chinese loans and the debt burden they cause
House of Representatives MP from Pale constituency Khin San Hlaing said that with regard to most of the yearly loan repayments being made to China, it was hard to find any remarkable projects being done with these loans.
— BNI

Analysis: Deft diplomacy required as China, Japan court Myanmar
While the West abandons Myanmar over the human rights crisis in Rakhine, China and Japan, understanding the value of the country’s strategic location in Southeast Asia, have done the opposite, accelerating their collaboration in a bid to get the upper hand and further their own grand plans.
— The Irrawaddy

Myanmar’s USDP delegation visits Vietnam
A delegation from Myanmar’s Union Solidarity and Development Party (USDP), led by Chairman U Than Htay, is paying a visit to Vietnam from December 17 to 22.
— Nhan Dan

Inflation spikes ahead of Central Bank’s rate liberalisation plans
Inflation in Myanmar has hit a two-year high of 8.2 percent since August, up from 5.5pc last year as a result of a steep drop in the value of the local currency against the US dollar, rising food prices and a recent spike in global oil prices, according to the World Bank.
— The Myanmar Times

Kachin latest state to launch Citizen’s Budget
The government of Kachin State became the latest regional executive to publish a Citizen’s Budget. The regional parliament speaker hopes that this will mean a step forward in bridging the gap between the government and the citizens, raising transparency on public financial management.
— The Myanmar Times

Procedures still causing delays in sending marine workers to Thailand
Although a memorandum of understanding has been signed between Myanmar and Thailand for sending Myanmar marine workers, only a few hundreds of workers could have been sent due to the procedures for ensuring legitimate entry into Thailand, said Thein Swe, Union Minister for Labour, Immigration and Population.
— Eleven Myanmar

Magwe aims to replace pigeon peas with cotton
The Magwe Region government will arrange the growing of cotton instead of pigeon peas in coming growing season, Regional Minister for Agriculture, Livestock and Irrigation U Win Maw Htay told The Myanmar Times. Pigeon peas are one of the crops that lost access to the Indian market after the country changed regulations for the import of pulses and beans earlier this year.
— The Myanmar Times

Local fuel prices fall by 14% to 27% in two months
Local fuel oil prices have decreased by 14 percent to 27 percent over the past two months due to decreasing global oil prices and slight fluctuation in the dollar price , according to petrol stations.
— Eleven Myanmar

Myanmar continues efforts to generate international demand for local gems
The Second Yangon International Gems and Jewelry Fair is set to take place in Yangon’s Lotte Hotel from January 9 to 13, according to the Gems and Jewellery Entrepreneurs Association
— The Myanmar Times

Declining price of coffee beans ‘no cause for alarm’
U Win Aung Kyaw, chair of the Ywar Ngan Coffee Association, said coffee farmers who are about to harvest the beans this month need not worry because the price will soon stabilise.
— The Myanmar Times

Myanmar government approves 35 small-scale projects for Rakhine state
The government has approved 35 projects to be carried out by the United Nations Development Program (UND) and the UN High Commissioner for Refugees (UNHCR) in Rakhine State.
— United News of India

Myanmar to accelerate 5G development despite risks
Common challenges for developing nations in their digital transformation including the lack of infrastructure and technical knowhow may not be able to deter Myanmar from embracing the fifth generation of wireless technology known as 5G, according to speakers at the Myanmar 5G Forum2018 held on Wednesday.
— Eleven Myanmar

DPI Holdings plans to venture into new markets like Vietnam, Myanmar
Aerosol spray paints maker DPI Holdings Bhd is seeking a listing on Bursa Malaysia’s ACE Market in early January, raising RM31.6 million at a market capitalisation of RM121.7 million, with most of the proceeds allocated for business expansion.
— The Edge Markets

Rohingya women stitch their lives back together
Through all the turmoil and bloodshed that the Rohingya community has had to face, some have found a ray of hope in an inspiring initiative as they rebuild and rehabilitate their lives.
— The Diplomat

A teak tycoon’s lasting bequest
Two imposing Buddhist shrines at a monastery in a quiet Kayin State village are the legacy of a feisty teak tycoon who took on the Irrawaddy Flotilla Company and lost.
— Frontier Myanmar