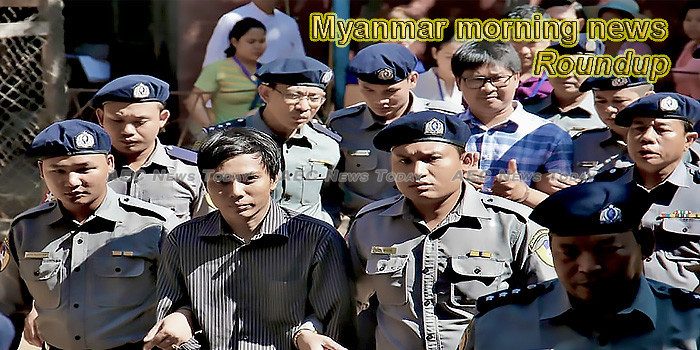 Myanmar seizes heroin haul worth $4.7 million: police
Myanmar has seized 370 kilogrammes (815 pounds) of heroin worth $4.7 million during a raid in the northeast, police said, the latest big bust in the world’s second-largest opium producer after Afghanistan
— Frontier Myanmar

Suu Kyi’s calls for more FDI in Burma may have worked
After touring Asia in recent months to drum up support for her country’s economy, several parties have reportedly begun showing interest in pouring more funds in Southeast Asia’s “Final Frontier”, as Suu Kyi puts it.
— Asian Correspondent

Workers demonstrate in Mandalay
Workers in Mandalay Region held a protest to demand the appointment of a new regional labour minister and urged officials to pay attention to labour affairs.
— The Myanmar Times

MPT issues statement over tax concerns
After an MP raised a question in deliberations at Union Parliament session on December 6 on non-inclusion of the name of Myanmar Post and Telegraph (MPT) Company in the list of taxpaying telecom companies.
— Mizzima

NLD dedicates team to monitor party’s local ministers, lawmakers
The ruling National League for Democracy (NLD) said it will form a team tasked with monitoring the performance of the ministers and fellow party lawmakers of the country’s states and regions.
— The Irrawaddy

Broader global coalition can solve Rohingya issue
Bangladesh needs to form a broader international alliance to resolve the issue of roughly 1 million Rohingya refugees in the country, a rights activist and political dissident from Myanmar has said.
— Anadolu Agency

Myanmar/Burma: Council adopts conclusions
The Council adopted conclusions on the situation in Myanmar/Burma. The Council expresses deep concern over the findings of the independent international fact-finding mission (FFM) of the UN Human Rights Council which conclude that gross human rights violations were committed in Kachin, Rakhine and Shan states, in particular by the Myanmar/Burma military (Tatmadaw).
— European Council (press release)

Military officers need apt experience for civilian posts, govt says
The President’s Office has ordered that unqualified military officers may no longer be transferred to ministries under the control of the civilian government.
— The Irrawaddy

MEA trying to facilitate visa on arrival between India and Myanmar: VK Singh
The Minister of state (MoS) arrived in Imphal on a two-day visit to oversee the operation of the Passport Seva Kendra in Imphal.
— The India Times

Ambitious Myanmar startup looks to expand overseas
With online to offline (O2O) platforms on the rise across Asia, Get All Myanmar Co, a locally owned enterprise that began commercial operations in February this year, is confident that it will be able to expand overseas in a few years, according to Nyein Chan Soe Win, the firm’s co-founder and chief executive.
—The Nation

Myanmar’s Kyaukphyu Port: The Dragon Enters In A Big Way
In a meeting with Suu Kyi, the Chairman of the China Development and Reforms Commission (NDRC), Ning Jizhe, tried to hustle Myanmar to workout an ‘implementation Plan’ for the China-Myanmar Economic Corridor (CMEC) under the Belt Road Initiative.
— Eurasia Review (analysis)

Navigating the employment landscape in Myanmar
Doing business in Myanmar holds as many risks as it does opportunities and firms keen on expanding into the country should be aware of the unique regulations and procedures involved in setting up shop.
— The Myanmar Times

Sino-Myanmar trade value plunges through Muse gate
The value of Sino-Myanmar border trade plunged sharply in the first two months of the current fiscal year due to a drastic drop in exports through the Muse gate, which usually sees the largest trade among the border points, according to data released by the Commerce Ministry, State Media reported.
— Mizzima

POSCO Daewoo to conduct exploration drilling at Myanmar offshore well
The South Korean trading company said in a regulatory filing that it has secured the right to drill at the A-3 well in the first quarter of 2020. It said 105.3 billion won (US$93.3 million) will be invested into the project from January 2019 onwards.
— Korea Herald

The Outsiders: Who Are The NLD’s Military-Linked Leaders?
Since the National League for Democracy (NLD) took power in 2016, the administration has given senior positions to a number of ex-military officers, opposition party members, and other outsiders
— Myanmar Now

Myanmar Rubbing Salt into its Own Wounds
The recent verdict in the trial of three Kachin activists, namely Lum Zawng, Nang Pu and Zau Jat, only serves to increase international pressure on Myanmar. On Friday, the Myitkyina courts sentenced the three activists to six months’ imprisonment and handed them a 500,000-kyat fine each.
— The Irrawaddy (opinion)

A Human Rights Day when Myanmar’s junta lived up to its reputation
Few people outside the country of Burma can understand the images and memories that are rolled into the simple expression “10-D.” For some democracy and student activists involved, it signifies their beliefs, sacrifices made, risks taken as well as the lost lives of their compatriots who died fighting for a cause they deeply believed in.
— The Irrawaddy (commentary)

Myanmar debates women’s rights amid evidence of pervasive sexual and domestic violence
For years, feminists in Myanmar have been fighting to gain even the most basic legal rights for women. Spousal abuse is still legal in the isolated country formerly known as Burma. Even criminal sexual assault is rarely punished.
— The Conversation

Rohingya women who fear to speak the truth about their babies born from gang rape
A dazed 15-year-old girl sits cross-legged on the earthen floor inside the bamboo hut where only a few months ago she gave birth in secret.
— The Times (paywall)

How Myanmar women martial artists smash stereotypes
In Myanmar’s recent past, martial arts was a sport reserved for men. However, a fledgling group of females are battling in and out of the ring to change attitudes in the Southeast Asian nation.
— The Myanmar Times

Auspicious Pyit Taing Htaung toy named Yangon region’s mascot
The Yangon Region government has announced that they have chosen a traditional toy, the pyit taing htaung (also known as the tumbling Kelly), as their mascot which is to be used as a symbol of Yangon Region and a point of interest for visitors to Yangon and in promotion of the tourism industry.
— The Irrawaddy

A mountain of rubbish to climb in Yangon’s alleys
The clearing of rubbish from alleys in Yangon resumed again last week in the townships of Kyeemyindaing and Tamwe following a temporary suspension of the work due to the monsoon season, says the Yangon City Development Committee’s Department of Pollution Control and Cleansing.
— The Myanmar Times