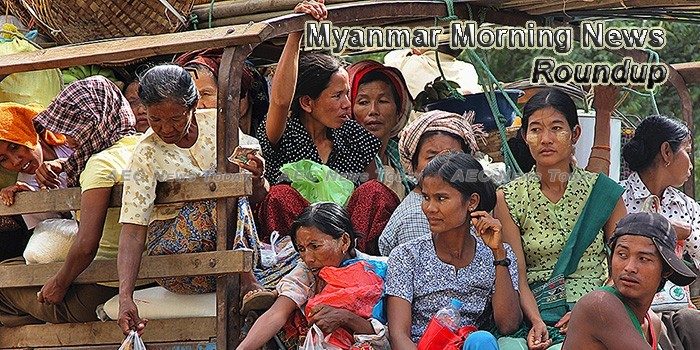 What they said: 10 influential quotes on the Myanmar economy in 2017-18
The last fiscal year was a tough one for the economy owing to the Rakhine crisis and the government’s insufficient attention to deal with economic issues.
— The Myanmar Times

Will Myanmar respond to Rohingya refugees’ demands?
For the first time since Myanmar’s military crackdown last year that led to almost 700,000 Rohingya fleeing into neighbouring Bangladesh, a government minister has visited a refugee camp.
— Al Jazeera

Myanmar state media describes Rohingya refugees in Bangladesh as ‘IDPs’
An error in today’s Global New Light of Myanmar leaves us wondering – has the government’s obsession with acronyms stripped them of all meaning, or are the country’s leaders simply mocking the world’s impotent disapproval of their crimes.
— Coconuts Yangon (paywall)

UNSC to visit Myanmar, Bangladesh, Iraq
The United Nations Security Council will travel to Myanmar and Bangladesh this month to see first-hand the impact of the Rohingya refugee crisis, and to Iraq ahead of elections.
— TheNews

Myanmar To Get $247.89m International Funding To Fight Diseases
The Global Fund will fund Myanmar through UN Office for Project Services (UNOPS) with 247.89 million dollars to combat HIV/AIDs, tuberculosis (TB) and malaria between 2018 to 2020, Myanmar News Agency reported on Thursday.
— PM NEWS

Is social media inciting violence in myanmar?
A Facebook post by a young Burmese man in September last year: “I am always honing my sword to kill you shit kalar [derogatory term]. You kalar are son of bitch, son of swine.” Accompanying the post is several pictures of him posing with a sword.
— The Daily Star

Tories urge Trudeau to hold Myanmar responsible for Rohingya genocide
The Conservative opposition is calling on the government to use all political and diplomatic measures to hold those, including Myanmar’s government, responsible for the genocide of Rohingya people.
— Ipolitics

Myanmar insurance industry poised for reform, awaits liberalisation
Insurance providers in Myanmar can expect a more competitive and promising landscape on which to do business in the near future.
— The Myanmar Times

Concerns Raised Over Public Display of Sacred Buddhist Relic
An unprecedented public display and procession of a sacred relic of the Buddha by the Yangon Regional Government has prompted fears that the more-than-2,500-year-old strand of hair could be damaged.
— The Irrawaddy

Angry Myanmar activists grab Zuckerberg’s attention on hate speech
A whoop of disbelief erupted in the small office used by anti-hate speech activists in Myanmar when they spotted the name that had dropped into their email inbox: Mark Zuckerberg.
— The Star Online

Enters Yangon’s fourth dimension
What a rusty planetarium tells us about Myanmar’s relation to science – and the need thereof.
Lanetariums are an invitation into the wonders of the infinite space. They are often modern establishments providing visitors and truth-seekers up-to-date information. Yangon’s planetarium is different.
— The Myanmar Times