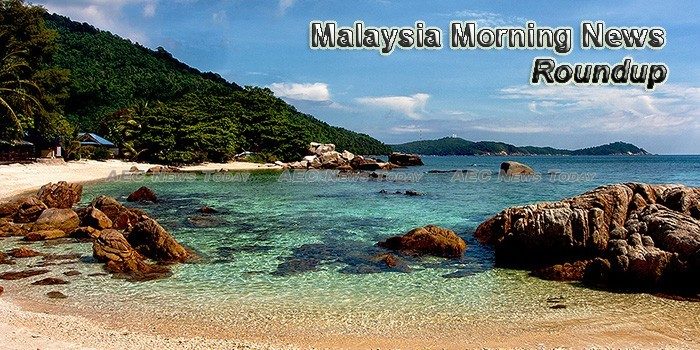 No ban on dealings with cryptocurrency exchangers but be extra careful in due diligence, BNM tells banks
Bank Negara Malaysia (BNM) is not prohibiting banks from dealing with digital currency exchangers or businesses, but expect them to be extra careful in their due diligence exercise in view of heightened money laundering and terrorist financing risks.
— The Sun Daily

Bank Negara says RM3.3b funds still available for SMEs
A total of RM3.3 billion in funding is still available under the Bank Negara Malaysia’s (BNM) Funds for small and medium enterprises (SMEs) for working capital and the purchase of machinery.
— The Star Online

Ringgit boosted by recovering oil prices
The ringgit extended gains from yesterday to open higher against the US dollar today, as more investors shifted towards emerging currencies, prompted by the recovery in crude oil prices, dealers said.
— The Star Online

Malaysia is giving away $1.6 billion in free money to its citizens, and rejects claims it is using the funds to influence some voters
Malaysia’s government is rolling out RM6.3 billion ($1.6 billion) in payments to millions of residents this week.
— Business Insider

From tea to takeaways, has Malaysia lost its appetite for business that does good?
When Malaysian entrepreneur Majidah Hashim quit her corporate job and set up a business two years ago helping people with autism make handcrafted teas with local herbs and flowers, the government stepped in to assist.
— Malay Mail

Malaysian PM says partnership with China brings win-win results
Malaysian Prime Minister Najib Razak has reiterated his welcoming attitude for investment from China on Tuesday, describing China’s business community as “one of our partners in building the high-income, high skilled Malaysia of the future.”
— Xinhua

Groupe PSA picks M’sia as Asean hub
Groupe PSA, which lost its bid for an equity stake in Proton Holdings Bhd, signed a share sale agreement and joint-venture agreement with Naza Corp Holdings yesterday — a strategic move for the French automaker to make Malaysia its Asean hub.
— The Edge Markets

Cambodia Morning News For May 15

Malaysia morning news for May 3