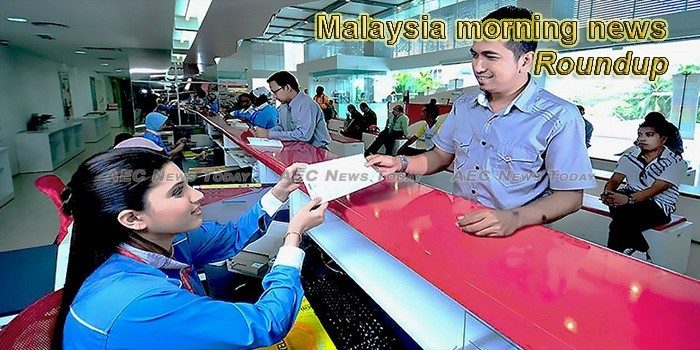 MoF approves 45 PPP projects (updated)
Some 45 out of the 67 public private partnership (PPP) projects under the Public Private Partnership Unit (UKAS) that are under review have been approved.
— The Star Online

Govt not selling affordable housing units in cities
Housing and Local Government Minister Zuraida Kamaruddin called on state governments to submit their respective lists of land that will be used to build affordable housing by the end of October.
— The Star Online

WHO praises Malaysia for stopping HIV, syphilis transmission from mothers
Malaysia today became the first country in the World Health Organisation (WHO) Western Pacific Region to be certified as having eliminated mother-to-child transmission of HIV and syphilis.
— FMT

Ambiga slams Mujahid over latest LGBT remarks
National Human Rights Society (Hakam) president Ambiga Sreenevasan has condemned Minister in the Prime Minister’s Department Mujahid Yusof Rawa over his remarks that any advocacy for the rights of the lesbian, gay, bisexual and transgender (LGBT) community is “extreme” and should be curbed.
— FMT

Malaysia’s transport minister plans to impose life bans against drivers in fatal accidents
The Road Transport Act should be amended to ensure drivers responsible for causing deaths are banned from driving for life, says Anthony Loke.
— Asia One

Eonmetall secures loans for phase one of FGV mills deal
Eonmetall Group Bhd has secured bank borrowings to finance the first phase of the project to build, own, operate and transfer (BOOT) palm fibre oil extraction plants at six selected mills for FGV Holdings Bhd which would require RM8.8 million per project.
— The Sun Daily

MALAYSIA MUST WIN HEARTS AND MINDS TO CONFRONT REGIONAL TERRORISM
It is vital that we do not ignore the relevant political aspects involved when we consider measures to counter terrorism. The Malayan Emergency (1948-1960) offers us the lesson that defeating terrorism is about winning hearts and minds. We should of course use the military approach, but at the same time, we need to consider the political background to the situation.
— South China Morning News

Malaysia need not follow Indonesia reforms, says journalist
MALAYSIA’s historic government change on May 9 might have been inspired by the reform movement in Indonesia 20 years ago, but the country need not follow the republic’s reform agenda.
— The Malaysian Insight

Bursa suspend Gamuda and MMC as shares hit limit down
The short-selling of Gamuda Bhd and MMC Corp Bhd shares was suspended for the rest of today after their share prices fell more than 15 per cent in early trade.
— New Straits Times