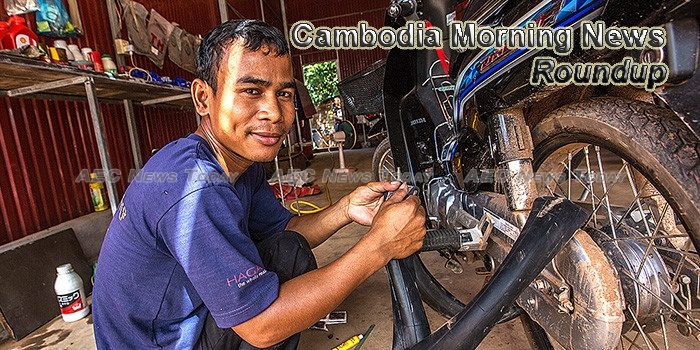 Industry 4.0: Executives on how ‘smart factories’ will impact Cambodia
The next industrial revolution will introduce “smart factories” in which computers and robotics communicating wirelessly will handle physical processes with very little input from human operators, leaving few job opportunities for unskilled workers, executives of German industrial giants said during a briefing in Phnom Penh on Friday.
—The Phnom Penh Post

Business Insider: Marketing the luxury of Rolls-Royce in developing Cambodia
Rolls-Royce is one of the most famous and distinguished brands in the world. The Post’s Cheng Sokhorng spoke to Thomas Buehler, general manager of Rolls-Royce Motor Cars Phnom Penh, about the luxury car brand’s presence and marketing in Cambodia.
—The Phnom Penh Post

Open an upmarket gastrobar in Cambodia? She’s the Singaporean who dared
Entrepreneur Nicole Chiang is one of a number of Singaporeans venturing into unconventional places such as Cambodia, Laos and Kazakhstan to do business, as profiled on the new series, ‘Going Places’.
—Channel News Asia (video)

Grace Opportunity for Visa Extension Work Permit Requisite
Foreigners seeking to renew their long-term Cambodian visas after the start of September are to be given a one-time grace period in which their employer can submit a letter vouching for them rather than provide a work permit, according to a popular visa agent who said he was contacted directly by immigration officials.
—The Cambodia Daily (paywall)

Hun Sen Promises Free Hospital Treatment, Checkups for Workers
Streamlining fisheries cantonments and allowing finer fishing nets to allow for a bigger catch will be introduced as part of an amendment to the Fisheries Law signed off by the Council of Ministers on Friday, an official said.
—The Cambodia Daily (paywall)

Fresh News Spins New Tales Of Spies and US Interference
Government-aligned media outlet Fresh News, the recent epicenter of pro-government leaks and attacks against NGOs, media and the political opposition, has continued to publish anonymous accusations that CNRP President Kem Sokha and his daughters were in a “political wedding” to U.S. backers and foreign agents.
—The Cambodia Daily (paywall)

International groups slam NGO and media closures
International condemnation for the government’s continued clampdown on NGOs and independent media organisations continued to flow in over the weekend, with Human Rights Watch (HRW) calling it an “escalating campaign of politically-motivated harassment, intimidation, and legal action”.
—The Phnom Penh Post

Government OKs Fisheries Amendment, Allows Smaller Mesh
Streamlining fisheries cantonments and allowing finer fishing nets to allow for a bigger catch will be introduced as part of an amendment to the Fisheries Law signed off by the Council of Ministers on Friday, an official said.
—The Cambodia Daily (paywall)

Unspoilt Cambodia: An introduction to the country’s lesser-known sights
Storm clouds were gathering over Angkor Wat. The temple looked eerily majestic, its five great towers spectacularly offset by a leaden sky.
—The Telegraph