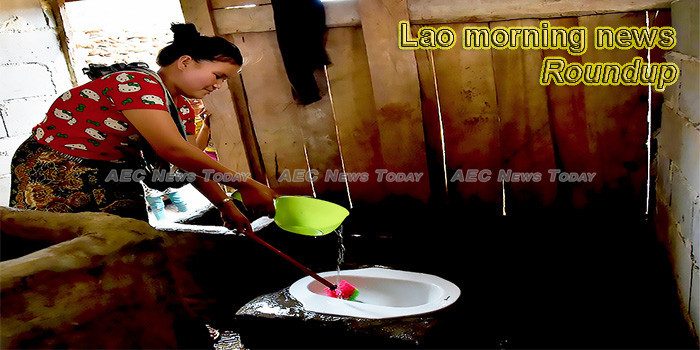 Many families believed to be below poverty line: minister
More families in provinces across the country are believed to have fallen below the poverty line as a result of this year’s floods – the worst in decades – a minister has told the cabinet.
— The Vientiane Times

Lao PDR’s battle against corruption
Following Prime Minister Mahathir Mohamad’s surprise victory in Malaysia’s 14th general election on 9 May, which was widely seen as a step forward for democracy, analysts and heads of government worldwide are now turning their eyes to the rest of the region in anticipation of similar political reversals.
— The Asean Post

More talk on Pak Bang Dam, but is anyone listening?
The Thai delegation at a meeting this week on a third dam planned for the Lower Mekong River at Pak Bang in Laos urged the Chinese project developer, Datang Corp, to conduct a transboundary study to resolve outstanding issues.
— The Nation

Govt struggles to legalise Lao workers in Thailand
Labour authorities will continue to work with their Thai counterparts to complete the registration of Lao nationals currently working illegally in Thailand.
— The Vientiane Times

Laos, partners pledge ongoing cooperation in Vat Phou restoration
Laos and its partners will continue to cooperate in restoring and sustainably preserving many ruined structures at the World Heritage site of Vat Phou Champassak, which combines aspects of Khmer architecture and the Hindu religion.
— The Vientiane Times

Urgent : Task force seeks help from Laos to trace elephant killers
The Second Army Region’s Suranaree Task Force is to seek help from Laos to find the killers of an elephant in a national park in the border province of Ubon Ratchathani.
— The Nation

Laos, IOM meets on migration
The Ministry of Foreign Affairs in cooperation with the International Organisation for Migration (IOM) on Thursday held a national level workshop on migration and cooperation between the Lao PDR and IOM.
— KPL

Drone owners in Laos advised of permit regulations
The department’s Deputy Director General, Mr Bounteng Symoun, told Vientiane Times the operators of drones that weigh one kilogram or more must obtain a certificate from the Radio Frequency Department.
— The Nation

VN helps Laos to build map database
Visitors to Laos won’t have any excuse for getting lost after a detailed map was created after a four-year partnership between the country and Việt Nam.
— Viet Nam News

Children call for brighter future for every child
The Government of Lao PDR, represented by the Deputy Prime Minister Sonexay Siphandone, UNICEF Representative, Mr Octavian Bivol, representatives of development partners, about 1,500 children and families gathered on Nov 17, 2018 at Patuxay to pledge their support to children’s rights and show their commitment towards building a world where every child is learning, safe from harm and able to fulfil their potential.
— KPL