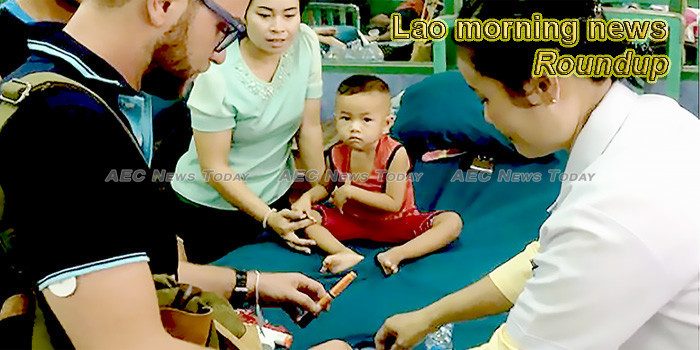 HIV/AIDS prevention, treatment targeted in US$1 million campaign
The Aids Health Care Foundation (AHF) is allocating over US$1 million to support the prevention and treatment of HIV/AIDS/STI in three target regions of Laos.
— Vientiane Times

Runoff from railway project pollutes river in Lao tourist destination
The Lao-Chinese railway project has released polluted water from construction work into the Xong River in Vientiane province’s Vang Vieng district, one of the most popular destinations in the country for tourists, an local resident and an environmental official told RFA’s Lao Service.
— Radio Free Asia

Transnational organised crime a challenge for Laos and Mekong region: UNODC
While all Mekong nations are impacted by illicit trafficking, Laos is the only state sharing a land border with all the countries in the sub-region, which makes it more vulnerable to transnational crime.
— Vientiane Times

Tourism, hospitality trainers beef up on teaching skills
Twenty-six technical and vocational education and training teachers from the tourism and hospitality sector have completed an intensive training programme.
— Vientiane Times

Tour operators call for chronic problems to be addressed
Authorities should address issues that are a source of annoyance for tour operators and tourists, to ensure better conditions for visitors during Visit Laos-China Year 2019 and beyond, tour operators say.
— Vientiane Times

Govt mulls measures to clamp down on overvalued road projects
Poor quality, excessive cost and the slow progress of road construction projects dominated discussions at the cabinet’s monthly meeting for November, which sought solutions to these chronic problems.
— Vientiane Times

“ARATA Garden Residences” launches Japanese developer’s first project in Laos
The community housing project “ARATA Garden Residences”, on the back side of LAO ITECC and next to That Luang Lake of Xaysettha district, will start its construction in early 2019 and is expected to be completed by the end of the first quarter of 2021.
— KPL