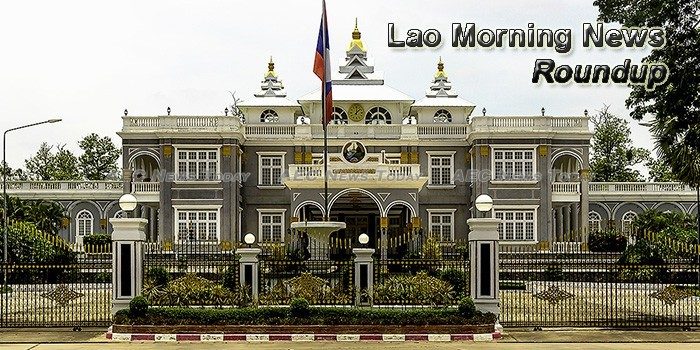 Concrete data, statistics necessary for “Three Builds” directive assessment
Concrete information and data is an essential requirement for assessing progress and achievements in the implementation of the Sam Sang (Three Builds) directive, with the halfway point of its pilot term now reached.
— Vientiane Times

Young Lao women urged to postpone childbirth in teens
The tradition for women to start a family while still in their teens could hamper government’s efforts to achieve the Millennium Development Goals by 2020 and Sustainable Development Goals by 2025, local daily Vientiane Times on Thursday quoted a senior Lao official as saying.
— Xinhua Net

Public park planned for city’s riverside
Vientiane authorities have agreed to the creation of a green lung for city residents and visitors in the form of a public park along the Mekong River in Sisattanak district.
— Vientiane Times

Punishment of errant judges critical, People’s Council hears
Judges who lack diligence in enforcing justice fairly or have been found to have issued verdicts without due reference to the facts of the case or notions of equality under the law must be punished accordingly, Vientiane People’s Council members have demanded.
— Vientiane Times