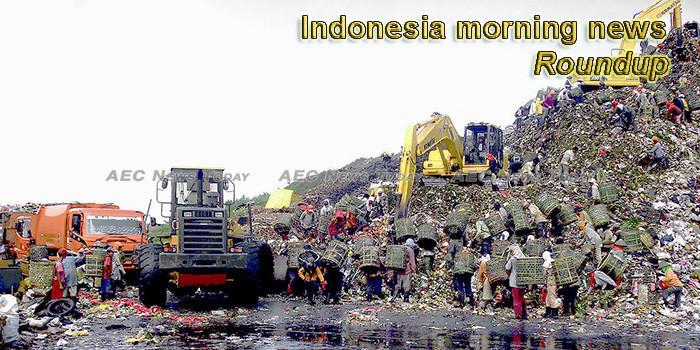 Indonesia’s arrest of JI leader Para Wijayanto exposes militant group’s active recruitment in bid to establish caliphate
Indonesian police’s arrest of the leader of Jemaah Islamiah (JI), the Southeast Asian offshoot of the international terrorism network al-Qaeda, has exposed that JI is on the resurgence, actively recruiting members and cultivating palm oil plantations to fund its bid to establish a caliphate in the country.
— South China Morning Post

‘Let’s talk about sex’: Jakarta urges parents to introduce sex education at home
In the past, most parents have probably avoided talking about “the birds and the bees” with their children because of taboos or because of their own discomfort.
— The Jakarta Post

As emerging economy, ‘high time’ for Indonesia to improve worker protection
A senior government official is warning that the safety of Indonesian workers is poorly protected, underlining that companies have continued to neglect safety standards in their operations.
— The Jakarta Post

Indonesia’s foreign tourist arrivals increase in first 5 months
The number of foreign holiday-makers coming into Indonesia rose in the first five months as the government intensively carried out promotion and improvement in facilities.
— Xinhua

Indonesia to block use of ‘illegal’ cell phones
The government plans to block the use of cell phones bought in the black market to curb the distribution of such phones.
— The Jakarta Post

Pipe repair to disrupt water supply in 45 spots in capital
The water supply in parts of Jakarta will be disrupted on Monday and Tuesday as PT Aetra Air Jakarta will fix its pipe at the Cilincing Distribution Center (CDC) on Jl. Raya Cakung Pal 2, North Jakarta.
— The Jakarta Post

Go Online to partner with 8 million MSMEs
The Communications and Information Ministry is targeting eight million micro, small and medium enterprises (MSMEs) to be partners of the Go Online program.
— Antara News

Densus 88 arrest terror suspect in East Java
The National Police’s Densus 88 counterterrorism squad arrested on Sunday a terror suspect from Klaten regency identified only as BTK, 42, while he was on his way to Ponorogo, East Java.
— The Jakarta Post

Residents around Soekarno-Hatta airport renew protests over land compensation
Local residents of Rawa Rengas village in Tangerang have returned to the streets to demand compensation from airport authorities for their land, which will be replaced by Soekarno-Hatta International Airport’s third runway.
— The Jakarta Post

Indonesia arrests Jemaah Islamiah leader: Report
A man believed to be the emir, or top leader, of the South-east Asia terror group Jemaah Islamiah (JI) has been arrested after a 16-year-long hunt.
— The Straits Times

Indonesian women’s activists to meet in Kendari
Female activists representing various women’s solidarity groups and non-governmental organizations in Indonesia will join a national conference, due to be held in Kendari, Southeast Sulawesi Province, on July 21-27 to enhance the spirit of women’s solidarity.
— Antara News

Harry’s endless hope for a better Indonesia
It is a bromide among politicians urging exporters: Australians must study Indonesian to sell more to the hungry customers next door.
— The Jakarta Post

Tempers flare as woman brings dog into Indonesia mosque, police say she may face criminal charges (Video)
An Indonesian woman may face criminal sanctions pending a mental health assessment after she caused chaos at a mosque by bringing her dog into the Islamic house of worship.
— Coconuts

Investigation Ensues on the Recent Death of Sumatran Elephant
A Sumatran elephant was discovered lifeless last week within the area of a plantation in Semambu Village, Jambi, owned by PT Lestari Asri Jaya (LAJ). The dead female elephant was first found by plantation employees.
— Tempo.co