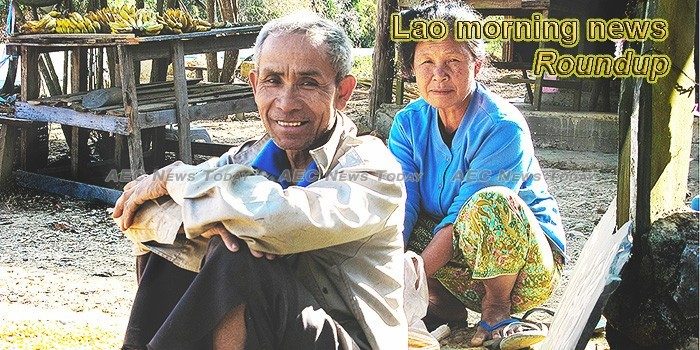 Laos Next Target For Chinese Tourist “Invasion”
With hordes of Chinese tourists overrunning one Southeast Asian country after the other as a result of a new travel freedom and rising spending power, Laos is the next destination on the map for them.
— Investvine

Laos discharges ‘may be issue’
Thailand is being advised to closely monitor the water discharge rate at two dams in neighbouring Laos to obtain information important for Thailand’s handling of the flood situation, particularly in the Northeast.
— Bangkok Post

New water shrine in Smithfield brings Laotian, U.S. vets together
It took six years for the Watlao Buddhovath of Rhode Island to complete the new water shrine dedicated Saturday in a ceremony filled with dance and music, but even longer to heal many of the scars from the Vietnam War that drove thousands of Laotians to the United States.
— Providence Journal

Army switches focus to flood relief, recovery in Attapeu
The Committee for Search and Rescue Operations under the supervision of the Lao People’s Army on Friday told reporters it would suspend its search and rescue operations and focus instead on relief and recovery.
— Vientiane Times

Russia responds to Laos bid for emergency humanitarian
The Russian Emergencies Ministry declared that it has sent around 36 tons of humanitarian help to Laos, which went through a new flood triggered by the collapse of a dam.
— MENAFN

Attapeu flood victims get cholera vaccine
The Ministry of Health has been distributing cholera vaccine to the thousands of people living in crowded shelters here, in a bid to prevent the onset of this potentially fatal disease.
— Vientiane Times

Ministry outlines plans for new school year in Sanamxay
Teachers in Sanamxay district, Attapeu province, will receive an allowance of one million kip each and schoolchildren will be given new uniforms and educational supplies at the start of the new school year which officially begins on September 3.
— Vientiane Times