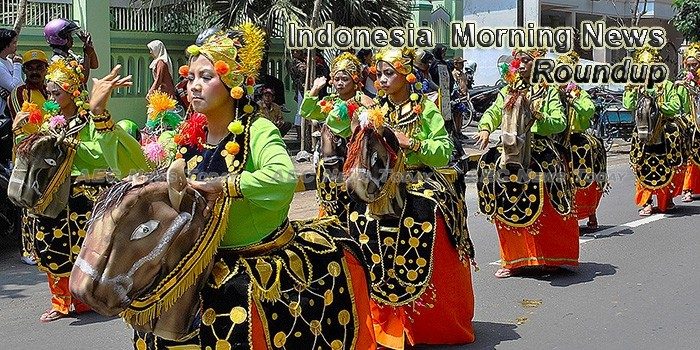 GlobeAsia Business Summit to Discuss Impact of ‘Trumponomics’ on Indonesia
GlobeAsia, an English language magazine catering to the business community in Indonesia, will hold a summit on Wednesday (05/04) which will highlight United States President Donald Trump’s economic policies and their impact on Indonesia.
— Jakarta Globe

NexMedia partners with Indosat for new internet/TV bundle
Pay-TV provider NexMedia has teamed up with telecommunications operator Indosat Ooredoo to announce a new package with a high-speed internet connection in response to rising demand and the increasing digitalization of entertainment.
— The Jakarta Post

Ice age art: 30,000yo jewelry, ornaments discovered on Indonesian island (PHOTO, VIDEO)
Prehistoric ornaments and jewelry as well as evidence of the earliest known cave art have been unveiled in Indonesia. Researchers believe the find may show that “ice age” humans weren’t as culturally underdeveloped as previously thought.
— RT

Sonoro Announces Private Placement Offering to Fund Appraisal Well in Indonesia
Sonoro Energy Ltd. (“Sonoro” or “the Company”) (TSX-V: SNV) announces that it intends to raise up to $3,300,000 by way of a non-brokered private placement (the “Offering”) of units, where a unit (a “Unit”) consists of one common share (a “Common Share”) of the Company and one half of one common share purchase warrant (a “Warrant”) of the Company, where each whole Warrant entitles the holder to purchase one Common Share within two years from the Closing Date (as hereinafter defined) of the Offering at a price of $0.05 per Common Share.
— Stockhouse

Indonesia committed to improving safety at nuclear facilities
Indonesia has demonstrated high commitment to improving the safety of nuclear infrastructure at the 7th Review Meeting of the Convention on Nuclear Safety (CNS) in Vienna, Austria, on March 27-April 7, according to a statement.
— Antara News

GREE Ventures leads $1m seed round in Indonesian startup Ayopop
Tokyo-based early stage venture capital firm GREE Ventures has led a $1 million seed funding round into Ayopop, an Indonesian bill payment platform. The round was joined by various high net worth individuals, and was supported by Freecharge founder Sandeep Tandon, the company revealed in a statement.
— Deal Street Asia

Aussie metal band Flaming Wrekage’s Indonesia tour killed after immigration police stop show, confiscate their passports
Flaming Wreckage is a heavy metal band from Australia that just wanted to come to Indonesia to rock out and melt the faces off of some of Indonesia hardcore metalheads. In fact, they say they weren’t even going to make any any money off of the performances they were scheduled to play around East Java in March.
— Coconuts Jakarta

Workshop Aims to Improve Food Control Systems in Indonesia
The Ministry of Health and the National Agency for Drug and Food Control, or BPOM, are presenting a four-day workshop in Jakarta this week as part of efforts to raise food safety standards in Indonesia.
— Jakarta Globe

Treason suspects in Indonesia plotted to ram truck into Parliament complex
The five men arrested for treason ahead of last Friday’s protests in Jakarta had plotted to have a truck ram into the back gate of Parliament and then let their supporters take over the complex, police said.
— The New Paper

PetroChina Poised to Step Up Development Efforts in Indonesia
China’s big three state oil companies are poised to pump up capital investment by 24% in 2017, ending years of yuan-pinching as oil and gas prices rebound.
— Netralnews