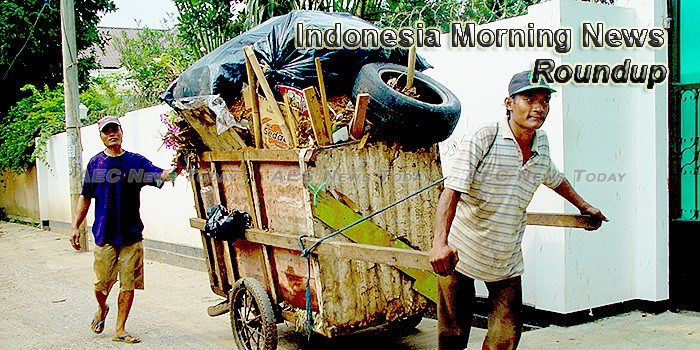 Asia’s rivers send more plastic into the ocean than all other continents combined
Every year, millions of tonnes of plastics are produced and trashed, with a small portion ending up in the sea, and gobbled up by tiny fish. Even though countries don’t report on how much plastic they are flushing, a recent study suggests that around 86% of the plastic running through rivers was coming from a single continent—Asia.
— Quartz

As Indonesia’s Sovereign Debt Gets Upgraded, $5 Billion Worth of Inflows Expected
Indonesia (EIDO) is one of the most favorable investment destinations for fund managers currently. Last week, S&P upgraded the country to investment grade on proposed budget curbs. According to the rating agency, the current fiscal policy and economic conditions are leading to lower risk in the country which opens it up for a wider range of investments.
— Frontera News

Coca-Cola Introduces Lighter Bottles To Tackle Waste In Indonesia
Coca-Cola has launched a new production line, which manufactures lighter bottles and will reduce the company’s plastic usage by more than 800 tonnes annually, according to the Jakarta Globe.
— ESM – The European Supermarket Magazine

Indonesia’s Kalla: TPP has lost its ‘allure’ without US
Indonesia has lost its motivation to join the Trans-Pacific Partnership due to the U.S. withdrawal from the trade pact, the Southeast Asian country’s vice president said in an interview.
— Nikkei Asian Review

Indonesia hits record closing high; Vietnam scales 9-yr peak
Indonesian shares hit a record closing high on Wednesday, with most markets in the region rising ahead of a likely rate increase by the US Federal Reserve, with investors awaiting more clarity on its future stance.
— The Edge Markets MY

Luxurious cell puts prison management in spotlight, again
The government has been widely criticized for its poor prison management ranging from rampant illegal levies, overcrowding and drug trading. Another issue that has put the country’s prison crisis into the spotlight is special cells for convicts allegedly willing to pay hefty sums to enjoy comfort behind bars.
— The Jakarta Post

Indonesia to Advance National Interests as Member of ILO’s Governing Body
Indonesia was re-elected as a member of the International Labor Organization’s governing body for another three years on Monday (12/06), the Permanent Mission of Indonesia in Geneva said in a statement.
— Jakarta Globe

EDITORIAL: The threat of oil import bill
Petroleum industry leaders and energy economists have warned President Joko “Jokowi” Widodo that allowing the country to increase its dependence on oil imports, which now account for more than 50 percent of domestic consumption, would make the economy highly vulnerable to the vagaries of wildly volatile oil prices and rupiah depreciation.
— The Jakarta Post

Skull-Washing Ritual Attracts Cross-Border Tourism in W. Kalimantan
A significant number of foreign tourists are expected to witness Nyobeng Sebujit, the unusual tradition of washing the skulls of the deceased, in Bengkayang, West Kalimantan, later this week.
— Jakarta Globe

Underwater tech a pressing need for Indonesia
As a result of the United Nations Convention on the Law of the Sea (UNCLOS), signed in 1982, the area of sea under Indonesian sovereignty and jurisdiction multiplied.
— The Jakarta Post