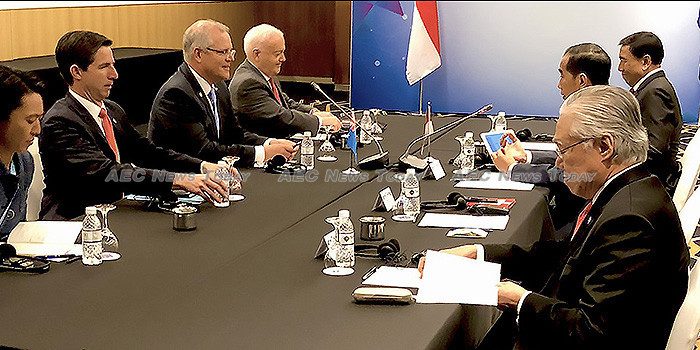 As heads of state and armies of policy and trade officials gather in Singapore for the 33rd Asean Summit and related meetings, a multi-billion dollar trade deal between Indonesia and Australia is headed for the rocks.

Six years in the making, the Comprehensive Economic Partnership Agreement (IA-CEPA) built mutually beneficial outcomes between the two  countries based on two-way trade worth some US$16.5 billion ($AUS11.8 bln) in 2017.

The IA-CEPA would have seen 99 per cent of highly traded Australian goods enter Indonesia under either preferential or duty-free terms, with all Indonesian exports to Australia exempt of tariffs and taxes in return. Such a partnership would be a much needed boon for Australian exporters of live cattle, beef, grains, dairy, steel and other primary goods to Indonesia.

This morning, November 14, these economic benefits hung in the balance as Australian Prime Minister Scott Morrison met Indonesian President Joko Widodo on the sidelines of the Asean 2018 summit in Singapore for urgent talks. This afternoon the long-awaited IA-CEPA trade pact lay in limbo.

The “urgent” meeting this morning between the two leaders came despite assurances as recent as last week by the Australian Prime Minister that negotiations were over, the deal was a good one for both parties, and the two sides looked forward to signing the deal before year’s end.

A joint media announcement on August 31 extolled the virtues of the IA-CEPA and its readiness for signing. The current gathering in Singapore was widely speculated as providing an ideal opportunity to get the deal into place.

But just as Australian and Indonesian manufacturers and exporters were getting down to business, a diplomatic rift opened between the two countries when Prime Minister Morrison announced Australia was considering moving the Australian embassy in Israel to Jerusalem. The embassy is currently located in the safe, uncontested city of Tel Aviv on the Israeli coast, along with most other foreign missions.

The surprise announcement came mid-October in the final days of a crucial by-election in Wentworth, a suburb of Sydney, for the parliamentary seat of former Australian prime minister Malcolm Turnbull under who negotiations for the IA-CEPA commenced. The comments provoked a fierce and immediate backlash from Indonesia, Malaysia, and 13 Middle Eastern and North African countries, amongst others.

In signalling what could be the Morrison government’s first major foreign policy shift, the new Prime Minister didn’t pull any punches, instead doubling-down with the claim Australia was also “‘open’ to recognising Jerusalem as the capital of Israel”.

The status of Jerusalem, or East Jerusalem in particular, is disputed in both international law and diplomatic practice. Both Israel and Palestine claim Jerusalem as their capital city, which Israel seized during the 1967 Six-Day War. In December 2017 US President Donald Trump announced that America would be the first country to relocate its embassy to Jerusalem, earning wide-spread condemnation.

Throughout October Mr Morrison made assurances that the free trade agreement with Indonesia was on track to be signed, dismissing suggestions that the Jerusalem issue would affect the outcome. “We do not conflate other areas of non-related policy when it comes to these agreements”, he said.

The ‘everything is good’ message from Mr Morrison continued, despite the Seven News network in Australia reporting that there had been an exchange of WhatsApp messages between Indonesian Foreign Minister Retno Marsudi and her Australian counterpart, Marise Payne immediately following the announcement. Unconfirmed reports at the time said Ms Marsudi had cautioned that relocating the Australia’s embassy in Israel to Jerusalem would be a “slap in Indonesia’s face” and “affect bilateral relations”. Support for a Palestinian state is at the forefront of Indonesia’s foreign policy.

That today’s meeting between Mr Morrison and Mr Widodo was a last ditch effort to save the IA-CEPA was widely known.

Indonesia’s Trade Minister Enggartiasto Lukita told media in Singapore yesterday that as long as Australia was considering the Jerusalem move, there would be no signing the deal.

“It can be signed any time but when you will sign it … depends on Australia’s position [on the embassy],” he said on Tuesday (Nov 13).

During Wednesday’s meeting between Mr Morrison and Mr Widodo, the issue of Australia’s embassy in Israel was discussed, and according to Sky News Australia, Mr Morrison maintained his stance that the issues were “not related”.

From a position of mutual excitement that the long negotiating process was over and both countries were going to enjoy increased prosperity as a result, the view of many is that the IA-CEPA is dead in the water and headed for the rocks.

Certainly neither side is talking with any expectation that it will come into play soon, Prime Minister Morrison saying late today that the IA-CEPA will be signed “when we get round to doing that. There’s no rush on this, no rush at all”.

Among the opportunities now in limbo, the chance for Australian companies to buy into the Indonesian education sector, with the IA-CEPA allowing up to 67 per cent foreign ownership initially. In 2017 Indonesian students studying in Australia injected A$833 million (US$600 mln) into the local economy.

However, the “Jerusalem excuse” may be more a case of convenience than anything else. President Widodo is due to contest what is foreshadowed as a hard-fought campaign against nationalist hard liner and conservative Islamist Prabowo Subianto in the 2019 Indonesia presidential elections.

In much the same way that Indonesia’s labour market is not expected to see any additional reforms before the elections due to the political opportunity made by rivals in the wake of those in March, so too a trade deal with a country considering moving its embassy in Israel to Jerusalem might be seen as something Mr Widodo’s opponents would exploit. With next year’s election result forecast to be close, it might mean the IA-CEPA stays in limbo for some time, irrespective of where Australia has its Israel embassy.