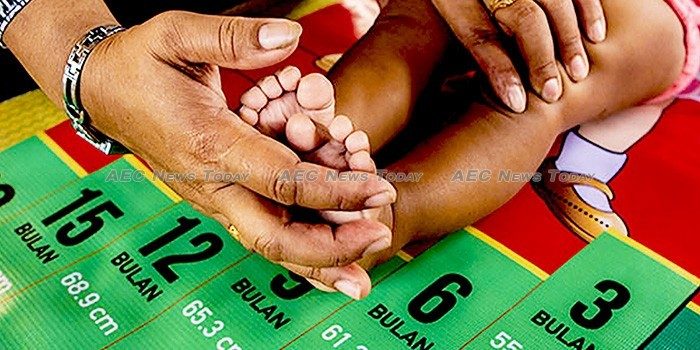 Salmiah thought she had learned all that she needed to know about raising a healthy child from being a community health worker in Batukliang, Central Lombok, since 2000. But, the mother of three was devastated when she found out that her two-year-old daughter had not grown normally.

“Due to lack of healthy food during my pregnancy my daughter was born underweight and at the age of two she was stunted”, Salmiah, who also works as a teacher at an Islamic elementary school said.

Stunting – the failure to reach one’s potential for growth – is caused by chronic malnutrition and repeated illness during childhood. It can permanently limit a child’s physical and cognitive capacity and cause lifelong damage. Globally almost a quarter of children under five-years-old are malnourished.

In 2013, 37 per cent of Indonesian children under the age of five, or almost nine million children were stunted, according to the National Health Survey.

Last year Indonesian vice president Jusuf Kalla called for a National Strategy to Accelerate Stunting Prevention. The strategy, supported by The World Bank, was built on Indonesia’s experience and global lessons, particularly Peru’s success in cutting its stunting rate by half in just seven years.

“Stunting among children under the age of five is a reflection of Indonesia’s future”, said Sri Mulyani Indrawati, Indonesia Minister of Finance. “The issue is now a government priority.”

“Stunting must be tackled together”, said Nila Moloek, Indonesia Minister of Health. “There should be better collaboration between government agencies at the national and regional level. Also between the private sector, civil society, and academics.”

To combat the problem, pregnant women and children under the age of two need to simultaneously access key services.

These services include: basic immunization, breastfeeding, dietary diversity, drinking water and sanitation, early childhood education, food insecurity measurements where they live, and a birth certificate to make sure they are in the system. Convergence of these key services is low in Indonesia.

By establishing a national strategy Indonesia aims to strengthen all these services and drive the convergence of national, regional, and community programmes.

A vital part of the government’s stunting reduction program is the Human Development Worker pilot — a collaboration between the government and The World Bank.

The pilot will contract 3,105 human development workers tasked to ensure the delivery of interventions to address stunting. The workers will help identify gaps in the services while at the same time encourage community members to use those services more often.

“The human development workers help us a lot”, said Zaenal, head of Mantang village in Lombok. “By having them participate in the community-health centres, we now know more about our community’s health.”

Salmiah, who is also a health development worker, supports the convergence of services in her village by ensuring that pregnant woman have regular prenatal check-ups, take iron supplements, consume healthy, nutritious food, and have access to clean water.

She found out that in her village 25 per cent of children under the age five, or 225 children, were stunted. Many parents, however, were in denial about their children’s condition. It took great effort to raise awareness on supplementary nutrition and good sanitation practices, she said.

Salmiah participated in training on how to use the ‘Length Mat’, a simple and innovative tool that communities and health workers can use to detect stunting early.

“Upon my return from training I shared more information about stunting with the community, particularly its impacts and how to overcome it. I spoke to community members, religious leaders, and village leaders. I am grateful that 30 per cent of the Village Fund is now allocated to prevent stunting”, Salmiah said.

Salmiah works closely with other facilitators and village representatives from the health post, early childhood centre, the conditional cash transfer programme, as well as from the water and sanitation programme.

By strengthening coordination between these service providers she wants to ensure that all beneficiaries receive the complete service package.

Her hard work has paid off. In the past 15 months the number of stunted children under the age of two decreased from 86 to 58. “Insha’Allah (God willing) there will be no poor families and every child in our village will grow to be tall and smart,” Salmiah said.

This article was  first appeared on  The World Bank and is reproduced here with its kind permission.

Lombok earthquake deaths rise to 387: Aid yet to reach all affected (video)