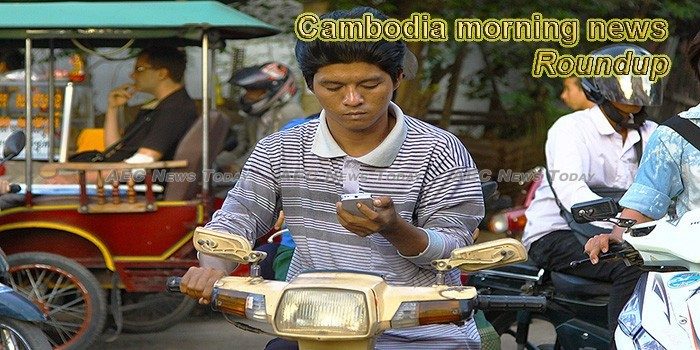 Cambodia poll sees 80 per cent turnout
Despite calls for a boycott, the just-concluded general election in Cambodia saw a turnout as high as 80.49 per cent, the National Election Commission (NEC) said.
— Thai PBS

Cambodian Expats Protest Election Dubbed ‘Funeral for Democracy’
The demonstrations marked the last push by the opposition to lobby for a boycott of the vote following the party’s dissolution by the Cambodian People’s Party-controlled Supreme Court in November.
— VOA Cambodia

Cambodia wakes to another era of Hun Sen rule after ‘flawed’ election
Cambodia woke on Monday to another chapter of rule by strongman Prime Minister Hun Sen, a day after a general election in which his Cambodian People’s Party (CPP) declared victory but one which rights groups said was neither free nor fair.
— Reuters

Cambodia Goes To The Polls – Government Blocks Critical News Websites
The sixth general election kicked off in Cambodia on Sunday, July 29, with a total of 20 political parties taking part in the race, a National Election Committee (NEC) spokesman said.
— Investvine

Cambodia to buck trend of cutting rubber production
Cambodia will not follow major rubber players in their move to cut production to boost prices, Pol Sopha, the director of the General Department of Rubber, said.
— Khmer Times

Election: Cambodian Post Their Inked Fingers on Facebook after Voting
Cambodian users posted photos of their inked finger to confirm that they had already voted in the election of the 6th National Assembly on Sunday.
— Fresh News

National election a success: NEC
The National Election Committee yesterday said that the national election was a resounding success, with 82.17 percent of registered voters turning out to cast ballots to elect the 125-seat National Assembly.
— Khmer Times

Going forward, looking back: observations on the 2018 Cambodian election
Cambodia will vote on Sunday July 29. Today, the 20 competing parties can make their final appeals to the voters.
— New Mandala

(De)Constructing Sihanoukville – A Photoblog
Let’s call it nostalgia, or call it utter astonishment – but something is happening WITH Sihanoukville. Something irreversible.
— Investvine

106 Investment Projects Approved in First Semester 2018: CDC
In the first semester of 2018, the Council for the Development of Cambodia (CDC) approved 106 investment projects, including 97 new projects and 9 expansion projects, according to CDC’s press release issued on Saturday.
— Fresh News

Advancing the local agriculture sector
Dr Kim Yong Hwan is the director of the Korea Programme on International Agriculture (Kopia), a project that has enabled the development of Cambodia’s first hybrid silkworm and maize varieties.
— Khmer Times

Cambodia election: Australia warned ‘you don’t drink champagne with dictators’
The Federal Government is being urged to reject the results of Cambodia’s elections and impose sanctions on the Hun Sen regime, after his ruling party declared victory in yesterday’s vote that was widely seen as a sham.
— ABC

‘My vote is useless’: Some refuse to cast ballots in Cambodian election
The 57-year-old farmer in a rural northern Cambodian province had voted in every election since a U.N.-led effort to bring democracy to this country a quarter-century ago.
— The Washington Post