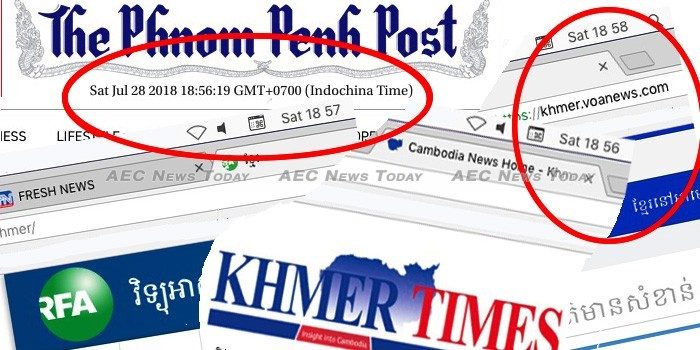 Ahead of national elections that are widely tipped to see the ruling Cambodia People’s Party (CPP) and Southeast Asia strongman Hun Sen returned to office tomorrow the country’s 8.3 million registered voters are finding it difficult to stay abreast of the latest developments, with 17 news sites being blocked by the government.

Not announced prior to implementation, access to news media sites including The Phnom Penh Post (PPP), Khmer Times (KT), VOA Cambodia (in Khmer- and English-language), and Radio Free Asia (RFA) in English- and Khmer-language started becoming problematic Saturday morning, and have continued throughout the day.

Al Jazeera English cited Phos Sovann, director general of information and broadcasting at Cambodia’s Ministry of Information (MOI) as saying that the Ministry of Telecommunications had been instructed to ‘close down” 17 websites that “are very political in their tendencies” and “provocative”. 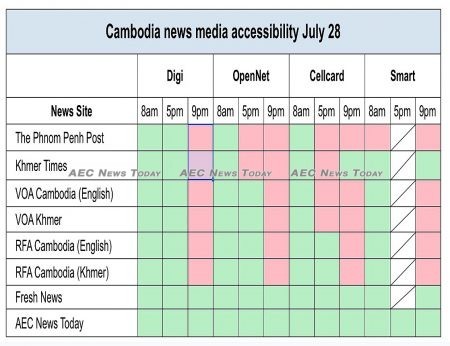 While AEC News Today was not able to immediately verify the statements attributed to Mr Phos, a trusted source separately provided a list titled ‘the websites that the Ministry of Information propose to ban on publishing on 28-29 July, 2018’.

Contacted via its Facebook page a ‘spokesperson’ for the National Election Commission (NEC) blamed the problems accessing some news media on Internet bandwidth, replying “bandwidth is too small please keep trying”.

As our monitoring chart throughout July 28 shows, blocking of news sites by four of the country’s ISPs has become increasingly intense throughout the day.

Pre-election silence periods are not new, nor unique.

Argentina, Australia, and France are just a few of the 38 countries globally who restrict advertising and/ or news reports in the lead-up to elections in print, broadcast, and/ or social media, with restrictions in some countries applying to all of its citizens.

In Asean Indonesia, Malaysia, Singapore, and the Philippines all have legislated ‘pre-election silence’ periods. However, Cambodia has no such legislation.

Informed via Facebook Messenger that AEC News Today was in possession of a list allegedly showing the 17 websites targeted for blocking, Sonny Inbaraj Krishnan, group managing editor of the Khmer Times said he was “surprised”, adding that “there is no need to block websites.

“The Cambodia government has a very robust ‘fake news law’. Why not use it?”, he said.

At Cambodia’s oldest newspaper, The Phnom Penh Post, editor-in-chief Joshua Purushotman said “we are very disappointed over the government’s action, especially since we have striven to be fair and neutral in our reporting, giving every opportunity to the government to reply to any allegations made against it. We do not see any valid reason for the Government’s action.

Mr Purushotman and Mr Krishnan both reported their websites as receiving higher than normal visitor numbers. 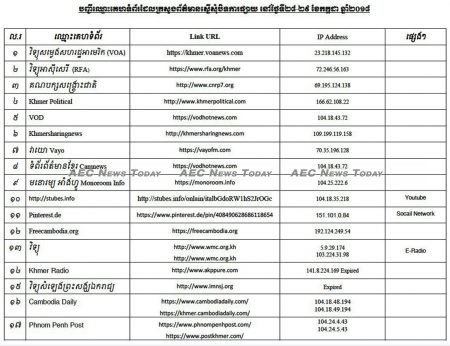 A list supplied to AEC News Today purporting to contain details of websites being blocked by the Cambodia government ahead of, and during the 2018 Cambodia general election

The general election tomorrow is the country’s sixth since the signing of the Paris Peace Accords in 1991. The deregistration last year of the country’s largest opposition party, the Cambodia National Rescue Party (CNRP) has already seen tomorrows polls labelled as “far from fair or free” by many commentators.

Former CNRP leaders and others have called on Cambodians heading to the polls tomorrow to boycott the election and/ or to spoil their ballot paper in the hopes of ‘shaming’ the government with low voter turnout.

In support of the so-called ‘clean finger’ campaign an assortment of rumours, tales, and stories are circulating claiming mythical benefits from boycotting the election.

None are tempered with the warning that even a moderately successful boycott will likely result in Mr Hun’s ‘popularity’ figure increase on a percentage basis, and risk the Cambodia Parliament for the next five years being a chamber with just one voice.