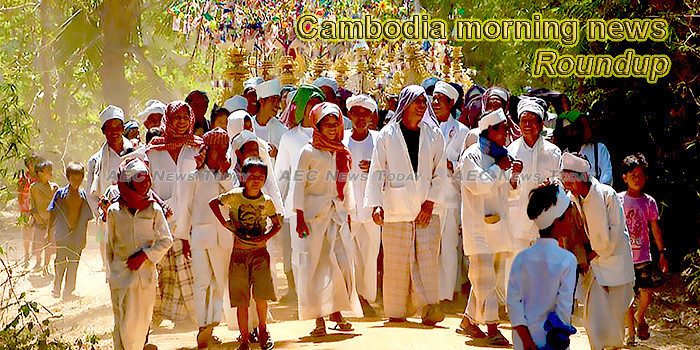 More stellar growth for Cambodia economy, but reforms needed says IMF
A report by the International Monetary Fund (IMF) forecasts the Cambodian economy to continue its robust performance in the year ahead, tipping 2019 Cambodia GDP growth at 7.00 per cent, 25 percentage points below its forecast of 7.25 per cent GDP growth for 2018.
— AEC News Today

Union leaders set to appeal
All six union leaders convicted for their roles in the 2013 Veng Sreng Boulevard protests plan to bring their case to the Appeal Court, spurred on by Prime Minister Hun Sen’s assertion that three of the six men were not involved in the violent protests.
— The Phnom Penh Post

Family of jailed RT news fixer seeks help from Russian embassy
About ten family members and friends of a news fixer charged over his role in a sex trafficking documentary dismissed as fake news by the government attempted to submit a petition to the Russian embassy in the capital yesterday asking it to lobby for his freedom.
— The Khmer Times

EU to fund three projects, including climate change
The European Union is preparing about 115 million euro grant to offer Cambodia on three projects while the agreement will be signed early next year.
— The Khmer Times

U.S. Deports Dozens More Cambodian Immigrants, Some For Decades-Old Crimes
A flight chartered by U.S. Immigration and Customs Enforcement is said to have departed Monday from El Paso, Texas, carrying about three dozen Cambodian immigrants who came to the U.S. legally, but were ordered deported for having committed a crime.
— NPR

CMAC signs MoU to use demining rats
The Cambodian Mine Action Center on Monday signed a Memorandum of Understanding with a demining NGO to use rats to detect mines in Siem Reap province.
— The Khmer Times

Preah Sihanouk governor swears to restore order
The governor of Preah Sihanouk pledged to restore the “province’s reputation and social order” on Monday, following orders by Prime Minister Hun Sen to curb criminal activity and disorder in the area.
— The Phnom Penh Post

UN fights malnutrition with snack
The production of Nutrix, a new fish-based wafer snack, was launched in Phnom Penh on Monday to assist in the fight against “severe acute child malnutrition” in Cambodia. The Nutrix facility is the first of its kind in the Kingdom and only the second in the East Asia and Pacific region.
— The Phnom Penh Post

Cracks in CNRP unity as Sam Rainsy takes over?
Cracks are beginning to be seen in Cambodia National Rescue Party (CNRP) unity and analysts predict that a real split in the opposition may be seen in the coming weeks, after party co-founder Sam Rainsy said his position as CNRP “acting president” had become fully effective following blessings from Buddhist monks in Paris on Sunday.
— The Phnom Penh Post

Cambodia Sanctions Bill ‘to Die in Senate’
A bill sponsored by the US House of Representatives aimed at democracy promotion in Cambodia is likely to hit a roadblock at the Senate when Congress closes in December, officials have said.
— Voice of America

Groups advocate employment for the disabled
Civil society organisations whose work mainly focuses on advocating the welfare of people with disabilities across Asia appealed to their governments to pay more attention to the private sectors offering job opportunities for disabled people.
— The Phnom Penh Post

USAID project helps trafficking victims
While human trafficking remains a serious concern in the Kingdom, a project initiated by the US Agency for International Development (USAID) helped 108 victims to receive compensation, while a further 1,482 also benefited from the project.
— The Phnom Penh Post

Police track EBC fraudsters abroad
National Police are seeking the extradition of two persons, one from Malaysia and the other from Laos, accused of scamming more than 7,000 Cambodians of more than $60 million in a Ponzi scheme, an official said yesterday.
— The Khmer Times

Do more to promote children’s rights: Ministry
The Ministry of Interior yesterday urged sub-national administration officials to pay more attention on promoting and addressing the rights of women and children.
— The Khmer Times

Ex-soldier jailed 12 years over shooting
Phnom Penh Municipal Court yesterday sentenced a former soldier to 12 years in prison and fined him about $250 for shooting and injuring a man and a woman while drunk in Sen Sok district in February.
— The Khmer Times

CRF: Kingdom’s rice exports do not impact EU farmers
The Cambodia Rice Federation (CRF) has urged the EU to revise its Safeguard Clause as it could prove devastating to the Kingdom’s rice industry. The EU committee has not announced its final decision.
— The Phnom Penh Post

European Union to disburse $131 million grant
The European Union is preparing to disburse a grant of 115 million euro ($131 million) to Cambodia that will be used for programs related to public financial management reform, sustainability in the fishing sector and climate change.
— The Khmer Times

MLC Approves Projects for Cambodia
Mekong-Lancang Cooperation Foreign Ministers’ Meeting approved new projects financed to the LMC’s countries which Cambodia will receive about $8 millions for its projects.
— The Khmer Times

Port development discussed
Officials from the Ministry of Public Works and Transport and Japanese experts yesterday discussed the development of Cambodia’s ports aiming to enhance their handling capacity.
— The Khmer Times

LMC approves 19 new projects for Cambodia
The Lancang-Mekong Cooperation has approved the financing of new member country projects, in which Cambodia is set to receive about $8 million for 19 new education initiatives.
— The Khmer Times

‘Win-Win event to see 30,000 take part’
Defence Minister Tea Banh said on Monday that about 30,000 people are expected to attend the spectacular inauguration of the Win-Win Monument, which from December 29 celebrates Prime Minister Hun Sen’s struggles and rebuilding of a nation.
— The Phnom Penh Post

Phnom Penh school adopts new way of teaching math
Sisowath High School in Phnom Penh, designated as a New Generation School, yesterday announced it will introduce the PAMA programme aimed at calculating mathematics faster, becoming the first state school in the Kingdom to do so.
— The Khmer Times

Pawn shop rolls-out own franchise
Cash U Up (CUU) pawn shop, a subsidiary company of the WorldBridge Group of Companies, on Monday said it is rolling out its own franchise line for those interested in a highly profitable business without the need to setup their own.
— The Khmer Times

Cambodia’s Miss Universe contestant to return home
Twenty-three-year-old Rern Sinat from Kampong Cham province, only the second Miss Cambodia to compete in the Miss Universe beauty pageant, is said to be “a little disappointed but in good spirits” after not ranking in the 2018 Miss Universe contest in Bangkok, Thailand.
— The Phnom Penh Post

Cambodia Morning News For May 5