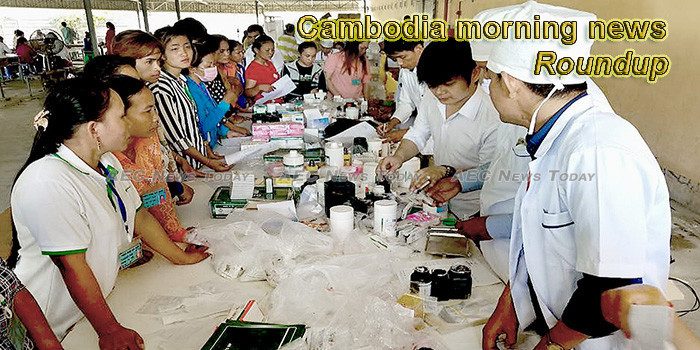 Cambodian Court’s Appeals Review a ‘Ploy’ to Weaken Political Opposition
Cambodia’s Supreme Court began on Wednesday to hear an appeal against the 2017 conviction in a defamation case brought against CNRP leader Sam Rainsy, now living in exile outside Cambodia, with observers calling the move a ploy by the ruling party to divide its opposition.
— Radio Free Asia

Media Monitor: No Press Freedom Left in Cambodia
The “facade” of free press in Cambodia “collapsed” in 2017, according to the annual report of the country’s preeminent media watchdog, released Wednesday.
— Voice of America

News fixer held over RT sex doc
A Cambodian news fixer who aided the production of a sex-trafficking documentary discredited by the government has been arrested in Bangkok by Thai authorities as he attempted to gain asylum in the Netherlands.
— The Khmer Times

NGOs set to rally at Freedom Park
Officials in Phnom Penh have allowed about 1,000 people representing a number of civil society organisations to conduct a rally today at Freedom Park to mark Human Rights Day.
— The Khmer Times

Soldier and two others nabbed for selling drugs
Kampong Speu provincial police on Saturday arrested a soldier and two accomplices and seized nearly 400 grams of crystal meth from them in Chamkar Mon city.
— The Khmer Times

Construction materials to be taken off roads
Preah Sihanouk provincial authorities have ordered all construction owners not to leave their materials on the roads as they obstruct traffic flow, warning the materials will be confiscated after a December 20 deadline.
— The Khmer Times

November export and import growth shrinks in China
China reported far weaker than expected November exports and imports, showing slower global and domestic demand and raising the possibility authorities will take more measures to keep the country’s growth rate from slipping too much.
— The Khmer Times

Mondulkiri rice fields damaged by forest fire
More than 40ha of rice fields belonging to a military unit and villagers has been damaged by a forest fire, Sre Huy commune councillor in Mondulkiri province, Mann Ream, told The Post on Thursday.
— The Phnom Penh Post

Exnet Taxi braces for stiff challenges as local ride-hailing market heats up
With more ride-hailing companies entering the domestic market, Exnet Taxi Cambodia, which is the country’s first operator, said its business is affected by the growing competition, and that a new business model is needed for it to survive in the industry.
— The Phnom Penh Post

Cambodia to Host First ‘IT Camp’ in Kingdom
Camp participants come from a variety of fields, both in the public and private sectors, he added, who wish to receive training on best practices when using modern technology.
— Voice of America

Experts call for more export training for farmers and SMEs
Boosting agricultural exports to China can only be done by improving sanitary and phyto-sanitary standards among local farmers and firms, experts concurred yesterday during a workshop organized by Germany’s GIZ.
— The Khmer Times

Throwing sand in one’s own rice bowl
A year ago, the European Union offered Cambodia the option of using a unique Harmonised Systems Code (HS Code) for its Jasmine fragrant rice and white rice to differentiate it from other Indica rice, a move that could have saved the nation from the conundrum it now finds itself in.
— The Khmer Times