The KMTTP: Will India’s Plans For Myanmar Become Reality? 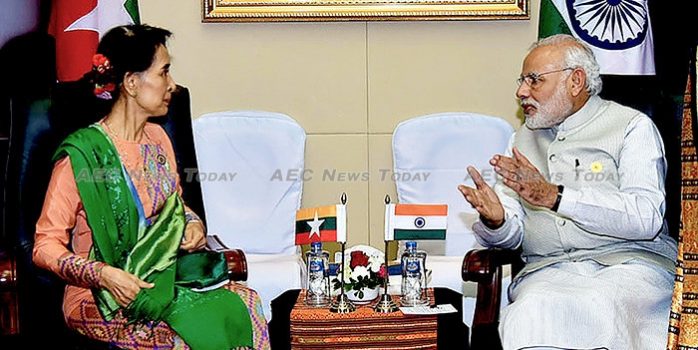 The Sittwe deep-sea port in Myanmar’s Rakhine State, which was financed and constructed by India, will soon commence operation. The port is one part of the Kaladan Multi-modal Transit Transport Project (KMTTP) in western Myanmar which aims to connect Mizoram in landlocked northeast India to the Bay of Bengal. Delhi is also planning to form a Special Economic Zone (SEZ) about 60 kilometres (about 37 miles) upstream of Sittwe.

Just 100 kilometres (62 miles) south of the proposed SEZ China has been involved in developing a SEZ comprising a deep sea port in Kyaukphyu, where a parallel oil and gas pipeline connects to China’s Yunnan province.

As is abundantly clear from these developments, Myanmar is geopolitically sandwiched between China and India and is having to maintain a careful balance in its relations with its two giant neighbours.

During its era of military rule between 1988 and 2011 Myanmar was strongly connected with China, a situation that pressured India into expanding its influence in Myanmar to mitigate Chinese influence. While on a much smaller scale than its northeastern neighbour, India provided substantial development assistance to Myanmar — including geopolitical, logistical, and energy strategies for its own benefit.

For example, the KMTTP installation of transport infrastructure aims to connect the Bay of Bengal overland through Myanmar to a remote region of India. The construction of hydropower near the Myanmar border, from which a substantial proportion of the electricity will be allocated to the region, is motivated by the desire for energy security.

Myanmar: India’s Gateway to The CMLV

Myanmar’s opening after 2011 has tempered China’s influence and created new opportunities for bilateral relations with other significant players, including India and Japan. And India has certainly embraced this opportunity.

Myanmar is India’s gateway to the east — being the only Southeast Asian country sharing a border with India. As a result, such projects are significant for India in improving not just connectivity between its Bay of Bengal ports and Sittwe, but also extending its overall ‘Act East’ policy.

India is also involved in upgrading the Kalewa–Yargi section of the India–Myanmar–Thailand (IMT) trilateral highway, which connects Moreh to Mae Sot in Thailand via Mandalay in Myanmar.

At the fourth India–CLMV (Cambodia, Laos, Myanmar and Vietnam) Business Conclave held in Jaipur on February 27, 2017, India’s Commerce and Industry Minister, Nirmala Sitharaman, noted that huge potential exists in CLMV nations for Indian manufacturers. “If Sittwe is connected with our Bay of Bengal ports, a lot of trade from India can go and land in Sittwe, and from there go to Myanmar or the CLMV”, he said

But there are concerns about the Indian involvement in such projects. Two hydropower projects – one at Tamanthi and one at Shwezaye – on the Chindwin River were suspended in July 2013 after questions were raised regarding their environmental and economic viability. This paralleled the sudden suspension of the construction of the Chinese Myitson dam in 2011.

It also remains to be seen whether the connectivity proposals mooted by Delhi in the last decade will be implemented, or remain a dream. At best, they may just stay half complete.

When its framework of agreement was signed in 2008 the KMTTP was scheduled for completion in 2015. As of the end of the first quarter of 2017, Sittwe Port and an inland terminal upstream of the Kaladan River are still incomplete and the overland road does not yet connect to Mizoram. The IMT highway that was scheduled to open in 2016 has been delayed at least three years.

Beyond taking a long time, there are other problems lurking for India’s planned SEZ, similar to that of the Chinese, such as issues with relocating residents and the potential threat of foreign investors or workers in the project encouraging anti-Chinese sentiment in the residents and ethno-nationalist extremists of Rakhine State.

In terms of addressing the latter problem, the advisory commission on Rakhine State — led by former UN secretary-general Kofi Annan — issued an Interim Report and Recommendations on March 16, 2017. It urges the Myanmar government to carry out a comprehensive assessment for Kyaukphyu to explore how the SEZ may affect local communities, and to map out how other economic sectors in the state may benefit (or possibly suffer) from the SEZ.

But this is only addressing part of the problem. As a matter of course a strategic environmental assessment should be carried out and the projects in Rakhine State, including the proposed Sittwe SEZ, should be carefully and comprehensively evaluated.

This article was written by Atsuko Mizuno, an Associate Professor at the Faculty of Economics, Kyushu University. It first appeared on East Asia Forum under a Creative Commons license and is reproduced here with its permission.

Myanmar has changed, but remains firmly in China’s grip