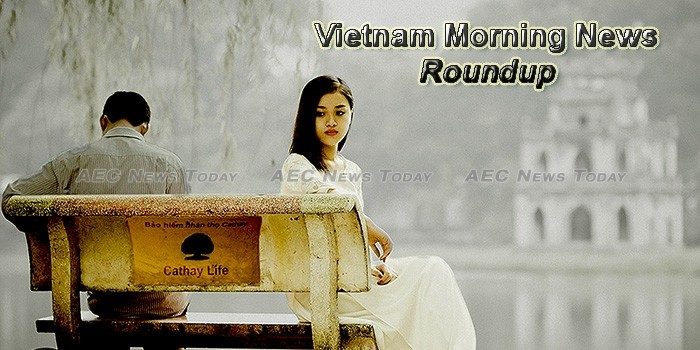 Vietnam Buys More Defense Equipment from Israel
Vietnam took delivery last month of a second batch of Rafael Python and Derby (SPYDER) surface-to-air missiles. The first batch was delivered last July, but that was not the first time the communist state had sourced defense equipment from Israel
— AIN Online

Vietnam’s Economy Is On Fire, And Fueled By Coal: How It Can Create A Greener Future
I’m wrapping up a trip to Asia that included an inspiring week in Ho Chi Minh City, Vietnam. Formerly known as Saigon, this commercial hub is booming.
— Forbes

Retail sales, service revenue increase over 7 per cent
Hà Nội’s retail and service revenue in the first two months of 2017 amounted to VNĐ365 trillion (US$16.4 billion), an increase of 7.1 per cent from the same period last year, according to the Hà Nội Statistics Office.
— Viet Nam News

Vietnam plans to charge foreigners extra fee for hotel stays
The proposed surcharge would only apply to foreigners, not local guests, and would go to a tourism development fund.
— VNExpress

Vietnam gains on PHL to top ASEAN PMI
FACTORIES in the Philippines capped a four-month growth slowdown in February, even as the pickup last month was overtaken by Vietnam’s performance that put that neighbor at the region’s lead, according to monthly surveys IHS Markit conducted for Nikkei, Inc.
— Business World Online

Vietnam to halt imports of five agro-products from India – govt
Vietnam will suspend the import of five agricultural commodities from India due to concerns over infectious insects, the Vietnamese government said Wednesday.
— VNExpress

How Much is a Piece of Ho Chi Minh City’s ‘Golden’ Land Worth?
Ho Chi Minh City’s most costly land prices can be found in District 1 around the People’s Committee building and near Ben Thanh Market. A square meter there fetches at least $30,000, according to the latest report by evaluation company Gachvang.
— VNExpress

Japan’s ruler pays first visit to Vietnam
Vietnam laid out the red carpet for the monarch of its biggest provider of aid yesterday as Japanese emperor Akihito paid his first visit to the South-east Asian nation.
— The Straits Times

60% use internet in Vietnam
ver 20 years of development, Viet Nam’s internet has made sustainable contributions to society and Government policies have resulted in 60 per cent of the population using the web, said Phan Tam, deputy minister of Information and Communications at the on-going APRICOT 2017 conference in HCM City.
— VietnamNet Bridge

Automakers struggle to keep Vietnam production amid ASEAN tariff cuts
Automobile companies are forced to cut back production in Vietnam following lower tariffs among Southeast Asian countries but said they would maintain operation in the country.
— VNExpress

Vietnam’s tourism sees strong 2017 start with Jan-Feb record growth
Vietnam has received more than 2.2 million foreign visitors in January-February, up 33 percent from a year ago, the government said, putting the country on track to meet its annual target to welcome 11.5 million foreigners this year.
— VNExxpress

EU Presses Vietnam to Improve Human Rights Ahead of Trade Deal
Vietnam is coming under pressure from lawmakers in Europe to improve its human rights record before ratification of an EU free trade deal that the Communist government prizes after the loss of a major U.S.-led agreement.
— VOA

Panasonic to double wiring device production in Vietnam plant
Panasonic Corporation will double its production capacity of wiring devices and circuit breaker in Vietnam by 2020 in an attempt to fulfill robust demand in the country and for export to neighboring markets, the business newspaper Saigon Times reported.
— VNExxpress

Woman fined nearly $300 for littering pavement
The Hoàn Kiếm District police in Hà Nội have slapped a woman with a fine of VNĐ6 million (US$266) for littering a pavement.
— Viet Nam News

India-CLMV ties set to grow
Hung was speaking at the fourth India-CLMV business conclave held in Jaipur City in the Indian state of Rajasthan on Monday, where he said India could support CLMV through its investments in manufacturing, business, services and infrastructure, as well as inter-regional trade, technical training and capacity improvement.
— Viet Nam News biz hub