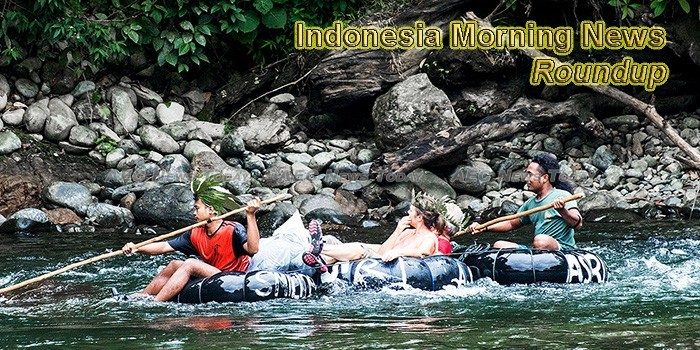 Some 50 indian businessmen to visit Indonesia in October
Businessmen of some 50 Indian companies were scheduled to visit Jakarta at the end of October to explore trade opportunities with Indonesian partners, an official said here on Saturday.
— Antara News

Wanted: a perfect pair
Indonesians are holding their breath as political bigwigs huddle behind the scenes with counterparts from other parties, traditionally allied or not, in a delicate game of matchmaking.
— Bangkok Post

Traffic-Choked Jakarta To Launch MRT Operations By Next March
Indonesia’s first mass rapid transit (MRT) rail system is on track to start operations in March next year, giving around 170,000 commuters a day the opportunity to avoid the capital’s insane traffic jams..
— Investvine

Indonesia to Get Bank Data of Citizens Living in US
Negotiations between Indonesia and the United States to exchange financial information are going smoothly and should be complete this year, an official told the Jakarta Globe on Friday (13/11).
— Jakarta Globe

Will growing intolerance lead to the end of democracy in Indonesia?
For much of the past 20 years, Indonesia has been held up as a model of democratic transition for other countries, particularly those with significant Muslim populations.
— Business Standard

Prosperity-Independence Village, Indonesia’s poverty reduction model
The Indonesian government has announced that it will, through the Ministry of Social Affairs, push efforts to eradicate poverty along its border by concentrating on the development of areas into “Prosperity – Independence Villages” (DSM).
— Vietnam Plus

Indonesia: Aceh Province Canes 15 Outside Despite Pledge To Stop Public Display
Indonesia’s conservative Aceh province publicly whipped 15 people on Friday, including a homosexual couple, despite a pledge in April to hold canings only inside prisons after the punishment drew international condemnation.
— Eurasia Review

West Sumatra Places 13th as Province with Most Drug Users
Provincial Narcotics Board (BNNP) of West Sumatra stated as many as 66,612 people in the area are engaged in drug abuse in categories of recreational use, regular use and addict.
— Netral News

Each Day Narcotics Kill 30 Indonesians: Minister
Chief Security Minister Wiranto on Thursday (12/07) drew attention to the daily loss of dozens of lives to drug addiction in Indonesia, and said the country’s “narcotics emergency” may be taken advantage of in case of proxy wars.
— Jakarta Globe

Contrasting accounts of Indonesian genocide and betrayal in West Papua
Two damning and contrasting books about Indonesian colonialism in the Pacific, both by activist participants in Europe and New Zealand, have recently been published.
— Asia Pacific Report

Indonesia beats Thailand to finish third at AFF U19 Championship
Indonesia defeated 2017 champion Thailand 2-1 in the third-place match at the 2018 ASEAN Football Federation (AFF) Under-19 Championship in Sidoarjo, East Java, on Saturday.
— The Jakarta Post

Indonesia Morning News For May 28