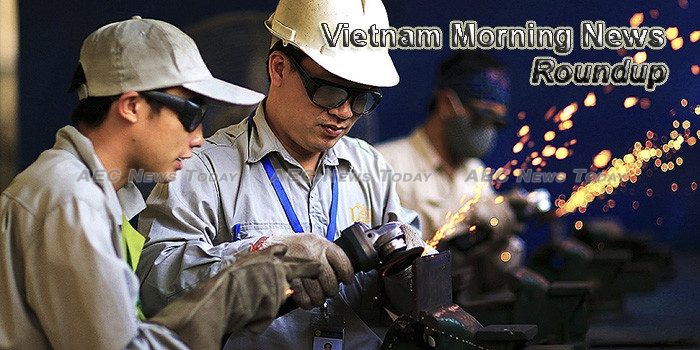 CPV chief urges HCM City to achieve stronger growth
General Secretary of the Communist Party of Vietnam (CPV) Nguyen Phu Trong has urged Ho Chi Minh City to be proactive in gaining support and assistance from other sectors for its stronger growth.
— VietnamPlus

Helsinki networking for Finnish businesses in Vietnam
Get in touch with Vietnamese students in the central areas from 13:00 – 16:00, in Haaga-Helia Auditorium, Pasila Campus. This event is free of charge.
— ScandAsia

Vietnam shifts away from agriculture
The economic structure in Vietnam’s rural areas has been transformed in the past five years, with fewer people working in the agriculture, forestry and fishery sectors and more in construction, industry and services, according to the 2016 national census on rural areas, agriculture and fishery.
— Fresh Plaza

Petrovietnam scandals lay bare stalling state-sector reforms
Vietnam has been enjoying the highest levels of economic growth in the Association of Southeast Asian Nations, but efforts to reform state-owned enterprises — a key to further expansion — seem to be going nowhere.
— Nikkei Asian Review

ITO conference promotes Vietnam as attractive IT destination
The Vietnam Information Technology (ITO) Conference 2017 kicked off in Ho Chi Minh City on October 19, aiming to introduce Vietnam as an attractive destination for IT services that is comparable to leading countries in the world.
— VietnamPlus

Robusta prices buoyed by Vietnam’s rain, cocoa also climbs
Robusta coffee futures on ICE rose to a four-week high and the nearby premium widened on Thursday as rain in Vietnam looked set to delay the harvest.
— Reuters/Times of India

Top 50 IT firms of Vietnam earn over 930 mln USD in revenue
The top 50 information technology (IT) companies of Vietnam in 2017 has total revenue of over 20.67 trillion VND (936 million USD) and employ over 35,500 people, according to the Vietnam Software and IT Services Association (VINASA).
— VietnamPlus

OVs give advice to HCM City’s hi-tech agriculture development
Nearly 100 overseas Vietnamese (OV) experts, intellectuals and entrepreneurs in agriculture have given advice to Ho Chi Minh City in developing hi-tech farming during a conference in the city on October 19.
— VietnamPlus

APEC FMM set to convene in Hội An
The APEC Finance Ministers’ Meeting and related meetings (FMM) will begin on Thursday in the ancient city of Hoi An, the central province of Quang Nam, chaired by the Vietnamese Ministry of Finance (MoF).
— Bizhub

Obstacles hinder the switch to E5 biofuel
There are only two months left until January 1, 2018, the date set for the nation to switch from RON A92 petrol to bio-fuel E5, but the plan is facing problems.
— Bizhub

Toyota Motor Vietnam announces Toyota Classics 2017
Toyota Motor Vietnam (TMV) held a press conference on October 18 in Hanoi to introduce its annual music series, Toyota Classics 2017, with performances from the Vietnam Performing Arts Centre under the Department of Performing Arts, with support from the Ministry of Culture, Sports, and Tourism.
— Vietnam Economic Times

The Future of Green Buildings in Vietnam
Vietnam’s rapid urban population growth is a catalyst for an increased housing demand, resulting in a decade-long boom for the building and construction industry.
— Lexology