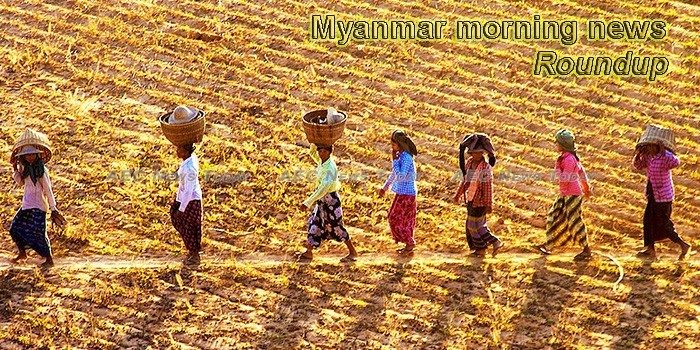 Myanmar court to deliver verdicts on jailed Reuters reporters
A court in Myanmar is set to hand down verdicts on Monday in the case of two Reuters journalists accused of obtaining secret state documents.
— Reuters

Myanmar’s Print Media Struggles to Survive
We are going to talk about the dwindling numbers of newspapers and journals at newsstands during the National League for Democracy-led government term. I have invited U Ko Ko (RIT) of Democracy Today and the Yangon Times, and Ko Zaw Thet Htwe of Tomorrow and the Healthcare Journals.
— The Irrawaddy

Do Modern Food Trends Pose Risks to our Health?
When American fast food giant KFC arrived in Myanmar in 2015 there was a storm of excitement.
— The Irrawaddy

Amata Holding preps for YSX listing on back of strong tourism potential
U Win Aung, CEO of Amata Holding Public Company, is preparing to list his company on the Yangon Stock Exchange (YSX) to take full advantage of the upcoming opportunities he believes lie ahead for the Myanmar tourism industry.
— Myanmar Times

Tatmadaw Cracks Down on Posters Celebrating 71st Mon Revolution Day
The Myanmar Army (or Tatmadaw) has ordered that signboards announcing this weekend’s commemoration of the 71st Mon Revolution Day be taken down or changed, on the grounds that they advocate rebellion against the central government amid the ongoing peace process between ethnic Mon and Naypyitaw.
— The Irrawaddy

Report: Phyo Myat Aung wins Myanmar Idol season 3
Unfortunately though I was unable to learn much about either the winner or the third season of Myanmar Idol, so I present some random observations instead.
— Frontier Myanmar

Rohingya emergency one year on: UN says thousands of lives saved, but challenges remain
Deadly disease outbreaks have also been held at bay in Cox’s Bazar despite “all the conditions being in place for a massive epidemic”, he said, noting that outbreaks of measles, diphtheria, polio, cholera and rubella have been contained thanks to preventive inoculation campaigns that have required four million doses of vaccine.
— AEC News Today PR Newswire (media release)

UK urges Myanmar to grant UN access to northern Rakhine
Upon the anniversary of the publication of the Kofi Annan-led Commission recommendations on August 24, the British government has called on Myanmar to provide “unfettered and effective access” for UN agencies to northern Rakhine in order to have “sustainable progress” in resolving “a humanitarian crisis of unprecedented proportions”.
— Myanmar Times

Mandalay’s masterpiece in the art of woodwork
One of Myanmar’s finest teak monasteries is being painstakingly restored to its resplendent glory with funding assistance from the United States.
— Frontier Myanmar

K-books and the mini-library
South Korea’s soft power is as big as the country is small and Myanmar did not escape the K-pop craze.
— Myanmar Times

132 Southeast Asian MPs call for ICC referral for Myanmar
More than 130 lawmakers from five countries in Southeast Asia have called on the UN Security Council to refer Myanmar to the International Criminal Court (ICC) over atrocities committed by Myanmar security forces against the Rohingya in Rakhine State.
— Coconuts Yangon

Gov’t, KNPP unable to meet as previously agreed
“Our delegation met with the PC (Peace Commission) while they were going to attend the third session of the 21st Century Panglong.
— BNI

The fall of literary magazines
Shumawa magazine allowed many aspiring writers to make a name for themselves in Myanmar.
— Myanmar Times

Year After Rohingya Massacres, Top Generals Unrepentant and Unpunished
On the eve of the anniversary of a military-led ethnic-cleansing campaign against Rohingya Muslims in Myanmar, the nation’s commander in chief, Sen. Gen. Min Aung Hlaing, was in Russia on an arms-buying expedition.
— The New York Times

Bus Time or Book Time
Most of Aung Kyaw Nyein’s time is wasted on the road – another victim of Yangon’s traffic. Going from his home in Kamayut to work takes about an hour, sometimes even more.
— Myanmar Times

Operators unfazed as Myanmar slows
YOUNG entrepreneurs in Myanmar remain upbeat on the country’s economic outlook despite weakening of the kyat, high inflation and delay to reform.
— The Nation

Justice still eludes the Rohingya refugees
For the past 12 months, some 700,000 Rohingya refugees have been living in the confines of cramped camps in Cox’s Bazaar and elsewhere in Bangladesh, somewhat safe from the mobs, soldiers and security forces that burned their homes and razed their villages across Rakhine state in northeastern Myanmar.
— GulfNews

Next Code set to digitally reshape Myanmar’s healthcare sector
THOUGH MOST of the healthcare service providers in Myanmar are yet to become familiar with the latest technical solutions, Next Code Pte Ltd, a technology start-up that focuses on creating a digital healthcare platform, has big hopes of shaping the digital future of the nation’s healthcare industry.
— The Nation

Focus on BIMSTEC and the Bay of Bengal
While Myanmar has traditionally focused its multilateral efforts on ASEAN, it is also the member of a lesser known regional organization, the Bay of Bengal Initiative for Multi-Sectoral Technical and Economic Cooperation (BIMSTEC). Created in 1997, in Bangkok, and with Bangladesh, Bhutan, India, Nepal, Sri Lanka and Thailand as its other member-states, BIMSTEC’s mandate is back in the limelight these days because it focuses on the Bay of Bengal, the strategic heart of the Indo-Pacific.
— Mizzima

Operators unfazed as Myanmar slows
YOUNG entrepreneurs in Myanmar remain upbeat on the country’s economic outlook despite weakening of the kyat, high inflation and delay to reform.
— The Nation

Rohingya still fleeing Myanmar one year after crisis | Video
Over the last few months, Rohingyas from Rakhine state continue to trickle into Bangladesh, opting to stay in refugee camps rather than remain in Myanmar.
— Channel NewsAsia

Tiny reminders of rape: Rohingya mothers cradle the unwanted
Yasmin is 33 days old. Wrapped in a checkered blanket, she writhes around in her makeshift crib, a rice sack attached to the ceiling with rope.
— CNN