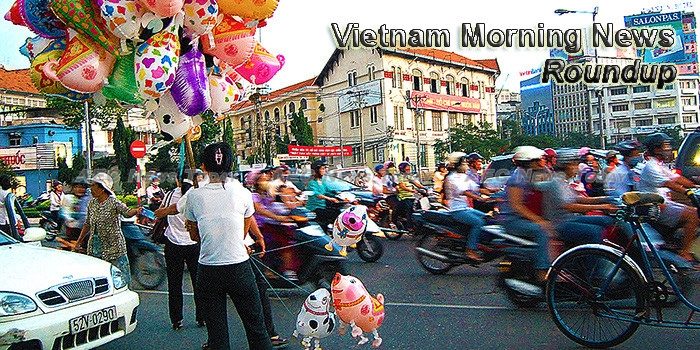 CPI down for second consecutive month
The consumer price index (CPI) in June fell 0.17 per cent against May, marking the second successive monthly decline and driven by lower petroleum and foodstuff prices, the General Statistics Office (GSO) reports.
– Vietnam EconomicTimes

Number of new businesses jumps in first half of 2017
Nearly 61,300 new enterprises were formed in the country in the first half of this year with total registered capital of more than VND596 trillion (US$26.2 billion).
– Viet Nam News Bizhub

1H trade deficit at $2.7bn
The latest figures from the General Statistics Office (GSO) show that Vietnam’s export turnover in June reached $17.8 billion, up 20.9 per cent year-on-year, and $97.8 billion in the first half, up 18.9 per cent.
– Vietnam EconomicTimes

Thailand top supplier of fruits to VN
Viet Nam imported US$376 million worth of fruits from Thailand in the first half of this year, which was double the figures of the same period last year.
– Viet Nam News Bizhub

Export value of fruit and vegetables increases
The export value of vegetables and fruits is estimated at US$1.7 billion in the first half of this year, marking a year-on-year increase of 45 per cent.
– Viet Nam News Bizhub

VCCI identifies unsuitable elements of Law on Investment
Sixteen of the 243 clauses in the Law on Investment that was amended in 2016 are unsuitable and ten need adjustments to State management, Mr. Dau Anh Tuan, Head of the Vietnam Chamber of Commerce and Industry (VCCI)’s Legal Department told a workshop on business conditions and doing business in Vietnam on June 30.
– Vietnam EconomicTimes

IT outsourcing conference in October
Việt Nam’s software industry and investment environment will be the featured topics at a Việt Nam IT Outsourcing Conference held on October 19-20 at the convention centre at Quang Trung Software City in HCM City’s District 12.
– Viet Nam News