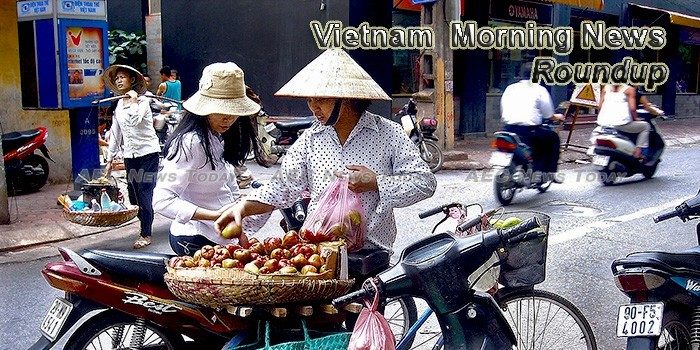 Vietnam, Asia’s Economic Icon, Is Suddenly Facing Slower Growth In 2017
Vietnam’s famously robust, export-led economy grew just 5.1% in the first three months of the year, a letdown unforeseen by both the government and economists. Drought last year hit agriculture into the first quarter of 2017. Mining slipped on a decline in resources such as coal and gas.
— Forbes

Manufacturing doing the heavy lifting for Vietnam in Q1
The latest PMI data coming out of Vietnam bodes well for the country’s outlook for the next couple of months, according to IHS Markit.
— Asia Times

The hurdles to loaning $.4.4 billion
Vietnamese farmers have pinned high hopes on the Government’s VND100,000 billion ($4.4 billion) low-interest credit package for the development of high-tech agriculture production. What’s your view of this?
— VietNamNet Bridge

Malaysia arrests 28 Vietnamese for illegal fishing, one dies in detention
The fisherman was said to have fallen seriously ill when his boat was detained Monday.
— Vietnam Breaking News

Vietnam HRC import prices down to four-month low
Import prices for re-rolling-grade hot rolled coil in Vietnam have dropped for the fourth straight week, as buyers refrained from booking amid expectations of further drops in China.
— MetalBulletin

Vietnamese Environmental Group Seeks to Monitor Formosa Payout Process
An independent environmental group called on the Vietnamese government on Wednesday to allow it to participate in monitoring the payment of compensation to those affected by the Formosa environmental disaster.
— Radio Free Asia

Vietnam morning news by AEC News Today is your one stop source for Vietnam news on matters of governance and policies affecting Asean business communities. It is published M-F by AEC News Today: Governance, not government; policies not politics.

Vietnam morning news for May 18