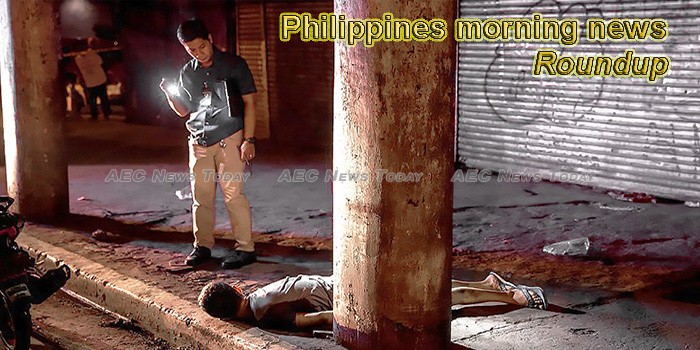 Govt debt payments hit P99.8B in Feb
Government debt payments rose in February as higher amortizations offset a decrease in interest payments, data from the Bureau of the Treasury showed.
— The Manila Times

IMF expects growth to reach 6.5% in 2019
The International Monetary Fund expects the Philippine economy to grow 6.5 percent in 2019, faster than the 6.2-percent expansion last year, despite the external challenges.
— Manilastandard.net

Philippines among top remittance recipients in 2018 — World Bank
The Philippines is among the top recipients of money transfers in 2018, which also saw remittances to poor and developing countries hit a fresh record and should become their largest source of external financing this year, the World Bank said Tuesday.
— The Philippine Star

RPT-Filling ‘Brexodus’ gap, Filipino nurses find English tests too daunting
Bracing for life after Brexit, British hospitals badly need more nurses like Filipino Jobie Escalona, but she twice flunked a mandatory English language test that asked her to write up the merits of immigration and computer education in school.
— Reuters

Accredited Boracay hotels reach 339
A total of 339 establishments are now cleared to operate in the world-famous island, Boracay, according to its inter-agency task force.
— The Philippine Star

ADB, WB urged to coordinate dev’t efforts in Asia-Pacific
Finance Secretary Carlos Dominguez III has underscored the need for the Asian Development Bank (ADB) and the World Bank to closely coordinate efforts and explore their complementarities to more effectively accelerate sustainable development in the Asia-Pacific region, the Department of Finance (DOF) said in a statement on Tuesday.
— Philippine News Agency

SEC issues rules on firms’ revival
The Securities and Exchange Commission issued draft guidelines on the revival of corporations whose terms had expired prior to the enactment of Republic Act No. 11232 or the Revised Corporation Code of the Philippines.
— Manilastandard.net

19 companies interested to build 50,000 telco towers nationwide
GIVEN the number of common towers to be installed, the Department of Information and Communications Technology (DICT) said 19 tower companies are interested to do business in the country.
— Business Mirror

Rice prices continue downtrend in March
Rice prices in the market continued to be on the downtrend since the start of the year, according to government data, and economic managers are expecting prices to decline even further now that the implementing rules and regulations (IRR) of the new rice law has been put in place.
— Inquirer.net

DAR turns over P23-M projects, lands to Zambo farmers
The Department of Agrarian Reform (DAR) has distributed some PHP22.9 million worth of projects aimed at boosting the livelihood of farming communities in three provinces in the Zamboanga peninsula.
— Philippine News Agency

Government prepares to fly out OFWs from Libya
THE Department of Foreign Affairs (DFA) reiterated on Tuesday that travel to Libya by Filipinos working in the conflict-affected areas will not be allowed until the situation in the country stabilizes and the alert level is lowered back to 2.
— Business Mirror

Cost of sending money to PH the lowest in region
High remittance costs are limiting the gains that migration delivers to poor and developing countries, the World Bank said, but the Philippines appears to be an exception.
— The Manila Times

Duterte should clarify ‘compromise’ with China –maritime expert
Duterte said driving away the Chinese vessels by force would not have any positive result so there should be a compromise.
— GMA News

Obstacle course back in SEA Games
Six events that will be held in an obstacle course have been restored following the acceptance of Laos as a fourth country to join the event.
— Manilastandard.net

Davao’s durian production down by 20% due to El Niño
A local durian fruit producer here has lamented the impact of the El Niño phenomenon to the fruit production, expecting a plunge by 20 percent.
— Philippine News Agency

Over 4,000 caught in anti-littering campaign
THE METROPOLITAN Manila Development Authority (MMDA) reported on Tuesday that 4,316 violators were apprehended during its anti-littering operations in the first quarter of the year.
— BusinessWorld Online

Duterte critics lead Day of Valor rally vs China
Staunch critics of President Rodrigo Duterte led a protest against China in front of the Chinese consulate on Tuesday, April 9, a public holiday, in honor of Filipinos who died during World War II.
— Rappler

Dialogues necessary to address persistent fisheries’ challenges
Researchers and scientists from 20 countries all over the world underscore the need for discussions to address the ongoing challenges in the field of fisheries and aquaculture.
— Philippine News Agency

BFAR issues ‘red tide’ warning on shellfish from 2 Davao towns
The Bureau of Fisheries and Aquatic Resources-Region 11 (BFAR-11) has warned the public against buying and eating shellfish products harvested from the coastal waters of two Davao region towns that were found positive for “red tide” toxin.
— Philippine News Agency

Makabayan solons mark Day of Valor by joining protest vs. China
Progressive lawmakers from the House of Representatives marked the Day of Valor on Tuesday with a call to the public to oppose and condemn China’s intrusion in the West Philippine Sea and the country’s economic affairs.
— GMA News

DoJ suspends 18 BI personnel for extorting from Koreans
The Department of Justice (DoJ) has suspended 18 Bureau of Immigration (BI) officers and employees for allegedly extorting some P9.2 million from South Koreans.
— Tempo

U.P. history teachers urge Filipinos to defend PH from China
The Department of History of the University of the Philippines (UP) Diliman reminded Filipinos to assert Philippine sovereignty and enforce the Hague ruling that invalidated China’s claim over the West Philippine Sea.
— Rappler

Why the first Filipino Food Month this April is more than just the food
From Ilokano dinengdeng to the Tausugs’s pianggang, this presidentially declared initiative is the first of its kind to put the focus on Philippine cuisine as a dynamic part of our cultural fabric
— ABS-CBN News

Philippines dominant crewing position under threat
he Philippines, the world’s dominant source of seafarers this century, is coming under severe pressure with the number of deployed crew dropping drastically last year and a host of top managers warning today that the country’s manning preeminence is under threat
— Yhe Medi Telegraph