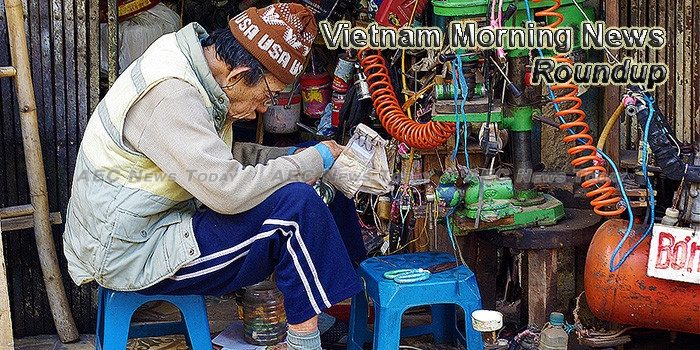 HSBC lowers 2017 economic growth forecast for Vietnam
Vietnam’s economy is likely to grow by only 6 percent this year, HSBC said in a new report released on Wednesday, revising down its previous forecast of 6.4 percent.
– VnExpress

Private companies’ influence on economy growing
As Thaco’s car sales decreased, the Quang Nam province’s budget revenue suddenly dropped by VND3 trillion. This news has been cited by economists to show the role of large private conglomerates in the economy.
– VietnamNet Bridge

Vietnam plans to top up oil reserves in bid to improve energy security
Vietnam’s prime minister has approved a plan for the country’s total crude oil and oil product stocks to rise to at least 90 days’ worth of net imports by 2020.
– VnExpress

VN firms yet to get the hang of AEC
The ASEAN Economic Community (AEC) can be a major catalyst for national growth, but few Vietnamese businesses have grasped the concept and its importance, officials and experts said at a seminar on Wednesday.
– Viet Nam News Bizhub

Việt Nam’s exports to Algeria grow 37%
Viet Nam’s export revenue to Algeria rose 37 per cent year-on-year to US$190 million in the first half of the year.
– Viet Nam News Bizhub

Enterprises urged to grasp food safety standards for export
Given the recent refusal of Vietnamese shipments of agro-forestry-aquatic products from choosy markets, domestic firms have to know about importers’ standards in terms of food hygiene and safety.
– VietnamPlus

Small agri production must end
Vietnam’s agriculture sector needs to end the practice of small-scale production and reorganize it on a larger scale towards high-tech agriculture, the “Reorganizing Agricultural Production” seminar, held prior to the second Vietnam Private Sector Forum (VPSF) at the end of this month, heard.
– Vietnam EconomicTimes

Appropriate policies needed to unlock $35b tourism industry
Viet Nam has great tourism potential but the country needs appropriate policies to create breakthroughs to develop tourism into a spearhead industry and affirm its position on the global tourism map, experts have said.
– Viet Nam News Bizhub

United Overseas Bank to set up Vietnam subsidiary
Singapore’s United Overseas Bank (UOB) announced on July 20 that it will be better positioned to provide stronger support to businesses and consumers in Vietnam as well as its regional clients investing in the country following the receipt of in principle approval from the State Bank of Vietnam to established a foreign-owned subsidiary bank (FOSB) the previous day.
– Vietnam EconomicTimes

Workers over 35 squeezed out of jobs at foreign-invested firms
According to a General Confederation of Labor survey, there are about 300 industrial zones (IZs) and export processing zones (EPZs) throughout the country, attracting 2.8 million workers.
– VietnamNet Bridge

Hanoi leaders blamed for blowing millions on late, expensive infrastructure projects
Contractors and investors were hand-picked for most of the projects, which were not put out for tender.
– VnExpress

Can Tho lures foreign investment in logistics
The Mekong Delta city of Can Tho wants to lure Singaporean and Japanese investment in the regional logistics centre in the city, a local official said at a meeting in July 19.
– VietnamPlus