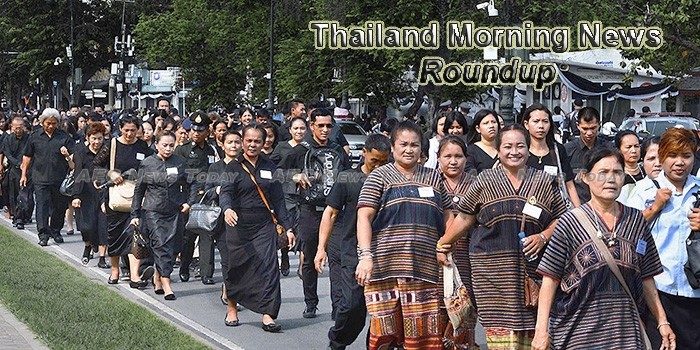 Thailand’s share of world GDP may shrink
THAILAND is projected to become the world’s 25th-largest economy in 2050, and as emerging economy will overtake some of the advanced economies, but it will fall behind neighbouring Vietnam and the Philippines, a PwC report says.
– The Nation

Thailand’s January Exports Buoy Gradual Economic Recovery
Thailand’s economy continued its gradual pace of recovery in January, with public expenditure and export growth strengthening but weakness in other indicators, according to the monthly report from the Bank of Thailand.
– Hellinic Shipping News

Myanmar education offers Thailand a lesson in pluralism
In a sign of what the future may offer, two major reports on Myanmar’s education system released by Save the Children and the Asia Foundation underline what can be achieved by ethnic communities educating themselves. The reports detail the rise of ethnic basic-education providers (EBEP) in Myanmar, a local response to the policy of ultra-nationalist “Burmanisation” – equivalent to ongoing “Thai-ification” here.
– Prachatai English

Thailand Insurance Market Liberalization: Relaxation of Foreign Shareholding Limits
The long-term growth forecast for Thailand’s insurance industry is quite positive, with increasing income, an ageing population, low market penetration rates, increased market liberalization in the ASEAN Economic Community (AEC), and supportive regulatory framework all expected to contribute to double-digit growth for the industry over the next few years.
– Lexology

Thailand ranks among countries with slowest mobile internet
Downloading music on your smartphone is a pain, and streaming videos is nearly impossible. So it’s no surprise that Thailand ranks near the bottom in terms of mobile internet speed, according to a chart released this month.
– Coconuts Bangkok

AIS partners with Netflix in Thailand
Netflix, world’s leading internet television network and AIS (Advanced Info Service) announced their partnership. This is Netflix’s first partnership with a mobile network in Thailand, enabling the largest mobile operator in the country to offer its customers the world-class and exclusive entertainment.
– The Nation

Saudi Arabia says travel ban to Thailand still in place
Claims that Saudi Arabia has lifted restrictions on travel to Thailand have been dismissed as untrue by a senior official.
– Thompson Reuters Zawya

Imperial Couple depart for weeklong visit to Vietnam, Thailand
Emperor Akihito and Empress Michiko arrived in the capital of Vietnam on Tuesday evening on their first trip to the Southeast Asian country where they will meet with the Vietnamese wives and children of former Japanese soldiers to promote goodwill and soothe some of the wounds left over from World War II.
– The Japan Times

With high standards in place, Thailand moves toward MICE sustainability
Hot on the heels of a year of strong and consistent growth, Thailand’s MICE industry looks onward and upward toward new levels of standardisation.
– CIM News Magazine

Thailand feels the Trump effect
I arrived at Government House, the headquarters of Thailand’s military government, on a sweltering afternoon in mid-February. After convincing an assault-rifle packing solider that I wasn’t a confused tourist, I found my way to the office of the government’s spokesman.
– The Washington Post

Thailand, Southern Rebels Agree to Framework for Limited Ceasefire
Negotiators from Thailand’s military government and a panel representing insurgent groups achieved a small breakthrough in exploratory talks by agreeing Tuesday to a framework for a limited ceasefire in the Thai Deep South, according to officials from both sides.
– Benar News

AIT eyes revenue growth on govt projects
Advanced Information Technology “conservatively” expects its revenue to grow by about 15 per cent to Bt5 billion this year, thanks to higher project backlogs and more government tenders coming up.
– The Nation

Popularity of bullfighting grows in South
BULLFIGHTING has been booming in Thailand’s South, attracting tourists and stimulating local economies, amid animal-right activists’ concerns.
– The Nation