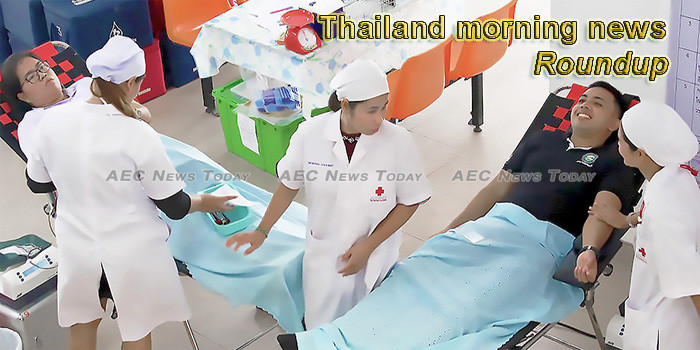 Former Foreign Minister Resigns from Dems Over Prayuth
Another prominent member of the Democrats, former foreign minister Kasit Piromya, has resigned from the party over its support for junta leader Gen. Prayuth Chan-ocha’s second term in office.
— Khaosod English

Thailand charges crew of stranded Rohingya boat
Thai authorities have charged the captain and crew of a boat carrying 65 Rohingya Muslims with assisting illegal immigration after the group was found stranded on a southern Thai island, police said on Wednesday.
— Thai PBS News

Department of Fisheries receives complaints about IUU regulations
Since the government and relevant sectors have stepped up their efforts to suppress illegal, unreported and unregulated (IUU) fishing and have the country removed from the yellow-card status imposed on it by the European Union (EU), another issue has arisen with domestic fishing operators voicing their concerns about the fishing restrictions and the import and export permission procedures.
— NNT

Govt relents on Senate selectors
The National Council for Peace and Order (NCPO) on Wednesday bowed to political pressure and revealed the names of 10 members of the Senate selection panel of whom six were eventually appointed senators. The…
— Bangkok Post

Cabinet approves in principle measures promoting sports
The Cabinet this week has approved in principle the draft law on promoting sports, as proposed by the Ministry of Finance. The bill will be forwarded to the Office of the Council of State for consideration.
— NBT World (video)

More House panels tipped
The number of standing committees in the House of Representatives is expected to be increased to ensure all parties have their share of committee chairmen.
— Bangkok Post

Future Forward party to censure the new government at the first opportunity
The Future Forward party will press for a censure debate against the government to demand military reform, the scrapping of conscription and the revocation of questionable concessions granted to big business, according to party spokeswoman Pannika “Chor” Wanich today (Wednesday).
— Thai PBS News

USA lays down Women’s World Cup marker with 13-0 thrashing of Thailand
World Cup favourite the USA has thrashed Thailand 13-0 to lay a marker down to the rest of the competition in its opening match in Riems, north-east France.
— ABC News

Stormy seas idle fishing boats
Small fishing boats were stuck in port by heavy rains that raised swells as much as three meters high. Boats based in Samae San, Bang Saray and Najomtien all were idled by the June 9 storm.
— Pattaya Mail

Many hurdles before cannabis oil is legal in Thailand
There has not been sufficient research to back a proposal to include cannabis oil on the National List of Essential Medicines, executives at the Department of Thai Traditional and Alternative Medicine (DTAM) said yesterday.
— Asia News Network

‘Pink Dolphins’ Spotted in Phang Nga (Video)
Two pink dolphins were spotted for the first time in years at a national park on Tuesday, to the delight of wildlife officials.
— Khaosod English

Khanom, An Emerging Destination in Thailand
Some of Thailand’s most popular tourist destinations are located in the Gulf of Siam.
— TravelNewsAsia

PM Prayut presides over event on water resources
The Office of National Water Resources (ONWR) has held an event to provide knowledge and communication channels on water resource management during this year’s rainy season. The event was held at the Thai Army Club on Vibhavadi Rangsit road, Bangkok, and was attended by some 40 relevant agencies.
— NNT

Academic suggests prostitution laws need change to be in line with reality
Law lecturer Akawat Laowonsiri said on Wednesday (June 12) at a seminar entitled “Review of the prevention and suppression of prostitution laws project”, held at Thammasat University’s Tha Prachan campus, that he is drafting new laws to introduce zoning for sex related activities under the authority of the Department of Local Administration.
— Thai PBS News

Celebs Given Slap on Wrist for Endorsing Fake Diet Supplements
Three celebrities have narrowly avoided prison despite being found guilty of falsely advertising unlicensed dietary supplements. Their rulings are the first in a wider scandal implicating 13 celebrities.
— Khaosod English

Drug smugglers get away but police seize their pickup stuffed with meth pills and ‘ice’
Drug smugglers have abandoned their pickup and a huge cache of drugs following a high-speed chase through the hills of Chiang Rai early yesterday morning.
— The Thaiger

In Photos: Pomelo opens first international store in Singapore
One of Thailand’s startup success story officially begins regional expansion with new Singapore store Over the past few years, the e-commerce brand Pomelo has grown into one of the success stories representing the Thailand startup ecosystem.
— e27

Years of transformation for retailers
The retail industry is undergoing one of the most profound periods of technological transformation in history and operators must adapt themselves to remain relevant.
— Bangkok Post

6 Senate Selection Committee Members Now Senators Themselves
It emerged Wednesday that six members of the committee that selected candidates for the junta-appointed senate are now themselves senators.
— Khaosod English

Malaysian peace talk facilitator visits Thailand’s deep South
The Malaysian facilitator for the peace talks between the Thai government and Mara Patani, an umbrella organization for Thailand’s separatist groups in the Deep South, paid a two-day visit to the region on Tuesday.
— Thai PBS News

Australian mining firm hopeful new industry minister can help settle conflict
Australian-based mining company, Kingsgate Consolidate Limited, is hoping that it will be able to hold talks with Thailand’s new industry minister, once appointed, to settle its long running conflict with the Thai government over the closure of its goldmine, known as Chatree goldmine, which straddles Phichit, Phetchabun and Phitsanuloke provinces.
— Thai PBS News

Reserve Senators Stacked With Junta Favourites, Unsurprisingly
Conservatives and individuals with prior ties to the junta dominate a list of reserve senators released Tuesday.
— Khaosod English

New study digs deep to shatter myths about Isaan
A conversation with the people behind a new study by the Asia Foundation on inequality in the Northeast.
— Isaan Record

World’s ‘biggest and best’ dinosaur show is coming back to Bangkok
This September, dinosaurs will ravish and rule the city as a dazzling multi-million production returns to Bangkok.
— Coconuts (paywall)

Pattaya Bikini Run sets world record
Pattaya got itself into the Guinness Book of World Records again when 3,000 runners turned up in swimwear for the biggest Bikini Run yet.
— Pattaya Mail

Top 10 Thai foods you must try
Thailand is known around the world not only for it’s breath taking scenery, beautiful hosts but also for their food.
— The Thaiger