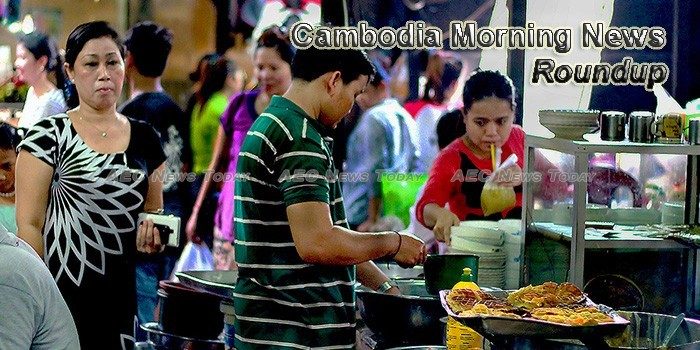 The U.S to Provide GSP Retroactive Refund to Traders
The Ministry of Commerce issued a notice, dated on April 21, 2018 to all the merchants who imported goods into the US market from January 2018 to request a tax refund after the US continued the Generalized System of Preferences (GSP), which provides duty-free treatment to goods of designated beneficiary countries.
— Fresh News

Cambodia-China Agree to Build Port in Kampot
Try Pheap Group and Guangxi Beibu Gulf International Port Group, on Tuesday, signed agreement on cooperation for the development of port that can accommodate vessels weighted from 10,000 to 30,000 tonnes to dock.
— Fresh News

US embassy shows off new solar installation
The US embassy in Phnom Penh marked Earth Day last week by introducing to the public its new solar panel installation which will eventually provide 18 percent of its energy needs.
— Khmer Times

US government calls out Cambodian rights abuses
The US State Department has published its annual report on human rights across the globe, describing a year of shrinking freedoms and rights violations in Cambodia, as well as seemingly chronic problems of prison overcrowding and anti-Vietnamese sentiment.
— The Phnom Penh Post

EU, US Reluctant to Remove Trade Preferences for Cambodia Garments: Fitch’s BMI
The European Union and the United States appear reluctant to remove preferential trade access for Cambodia’s vital garments sector, Fitch’s BMI research unit said on Tuesday (24/04), despite calls from rights groups for targeted sanctions in the wake of a political crackdown ahead of a July general election.
— Jakarta Globe

Local firm Arc sees potential in 3D-printing tech
As the white, cube-shaped machine begins to whir at the front of the room, a metal arm can be seen jerking back and forth through the box’s transparent front-facing panel. The robotic mechanism whirs as it works, and onlookers watch as the 3D printer creates a small figurine of a dinosaur out of melted plastic.
— The Phnom Penh Post

Cambodian Journalist Charged With Incitement Flees Amid Crackdown
A Cambodian journalist charged with “incitement to commit a felony” over his election coverage said on Tuesday that has fled the country fearing arrest and has been given refugee asylum status by the U.N. refugee agency.
— VOA Cambodia

‘Mountains and mountains of plastic’: life on Cambodia’s polluted coast
Looking down into the water that lies beneath the ramshackle houses of Sihanouk, Cambodia, it is hard to imagine that the sea is there at all.
— The Guardian

Labour group appeals for Workers’ Day march
The Cambodian Labour Confederation has submitted a request for its members to conduct a march on International Workers’ Day next week in the capital, starting from the Council for the Development of Cambodia near Wat Phnom and ending at the National Assembly.
— The Phnom Penh Post

Shocking story of mass murder behind photos sold for profit as ‘stock’ images
THE woman with her baby stares quietly into the camera, her passive gaze perhaps containing some knowledge of the unspeakable horrors that were about to befall her.
— News.com

Cambodia Morning News For May 24