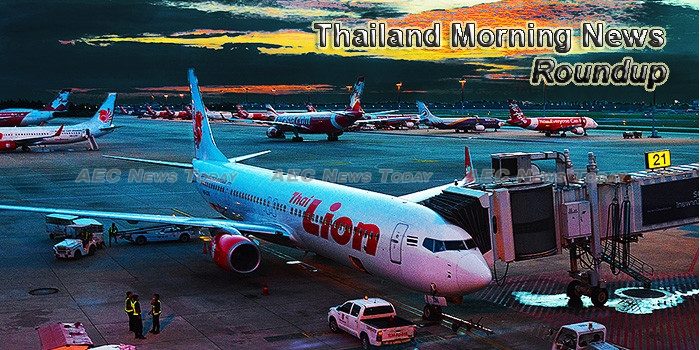 Finance Ministry to reforecast GDP for 2017
Fiscal Policy Office (FPO) Director-General Krisada Chinavicharana said the Ministry of Finance will readjust the 2017 economic growth earlier forecast at 3.6 percent due to some contributing factors which have improved than initially expected.
— NNT

35.7% foreign firms to invest more
About 35.7 per cent of 600 foreign companies with investments in Thailand will increase them this year, while the rest will maintain current investment levels, a survey by the Board of Investment has found.
— The Nation

Thailand is Patient Zero once again
In Thailand, everything turns on the number 20. At the same moment the nation commemorates the 20th anniversary of the Asian financial crisis, Prime Minister General Prayuth Chan-o-cha is rolling out his 20-year vision for the economy where it all began.
— AsiaTimes

BUDGET DISBURSEMENT UP 2.5% IN FIRST 8 MONTHS
The government’s budget disbursement edged up 2.5 per cent year on year to Bt2.03 trillion for the first eight months of fiscal 2017 starting last October.
— The Nation

POLITICOS URGE PRAYUTH TO COME CLEAN OVER ‘JUNTA PARTY’
Politicians from both major camps Tuesday urged junta chairman Prayuth Chan-ocha to clarify whether he will form a party for the next election.
— Khaosod English

Dangers lurk on rocky road from crisis
POLITICAL upheaval and sluggish economic growth have marked Thailand’s faltering steps since it emerged from the grip of the Asian financial crisis.
— The Nation

Yingluck’s rice probe petition gets shot down
The Supreme Court’s Criminal Division for Holders of Political Positions has dropped a petition lodged by former prime minister Yingluck Shinawatra, who wanted it to check 16 rice storage facilities she claims will clear her name in the rice pledging scheme scandal.
— Bangkok Post

Bangkok observation tower worth THB 7 6 bn
The Cabinet has allowed the Bangkok Metropolitan Administration (BMA) to select a private company to construct the “Bangkok observation tower” without bidding. Prime Minister Prayut Chan-o-cha confirmed the selection of contractors is based on benefits of the project.
— NBT World (video)

NBTC puts pressure on Facebook and YouTube to comply to Thai laws
Advertisers and media agencies were warned that they could not advertise their brands or products with providers of OTT (Over The Top) content and platforms that were not registered with the National Broadcasting and Telecommunications Commission within July 22 deadline.
— Thai PBS

Recovery by corporates hailed as sign of resilience
TWENTY YEARS after the economic crisis of 1997, Thailand’s corporate sector has undergone a strong recovery, up to and including making more investments outside the country.
— The Nation

Ministry to keep rice prices steady
The Commerce Ministry is brainstorming policies to stabilise paddy prices ahead of the harvesting season in the third quarter of the year, when 24-26 million tonnes of paddy are due to flood the market and depress prices.
— Bangkok Post

PM admits new law too tough
Prime Minister Prayut Chan-o-cha has instructed the Labour Ministry to come up with urgent measures to soften the impact of the executive decree on foreign workers as the stringent new labour law has rraised concern about manpower shortages in some businesses.
— Bangkok Post

Hybrid-renewable power bidding due
The bidding process for licences of up to 300 megawatts of power from hybrid-renewable resources is set to be launched in the second half of this year, according to the Energy Policy and Planning Office (Eppo).
— Bangkok Post

Songkhla keen on 24-hour checkpoint with Malaysia
Traders and officials alike are looking forward to seeing the main border crossing with Malaysia open around the clock, but warn the benefits for tourism could be mixed.
— Bangkok Post

Call to limit imports, use of chemicals in agriculture
Thailand (NHCT) organised the Social Forum on Driving Policy and Cooperation on Social Issues for Sustainable Development.
— Bangkok Post

Energy Ministry takes action against palm oil oversupply
The Ministry of Energy has called for cooperation from palm oil retailers to stockpile their supply as the product’s price has been dragged down by an oversupply, while also asking bio-diesel makers to increase the ratio of palm oil in the fuel to use up the surplus.
— NNT

Suspend deputy, NOB boss told
The National Office of Buddhism (NOB) director has been advised to suspend his deputy after the high-ranking official was accused of being linked to the embezzlement of 13 million baht in maintenance funds for a well-known Ayutthaya temple.
— Bangkok Post