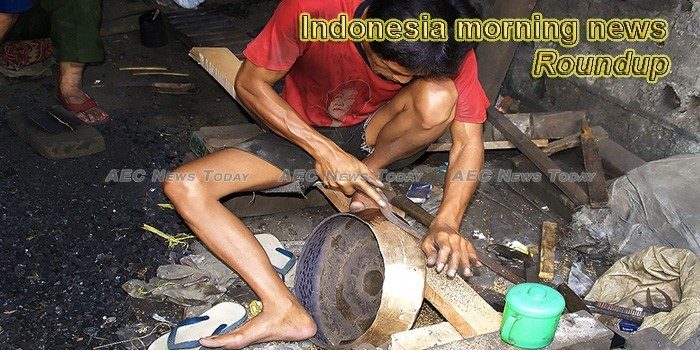 Indonesia braces for prolonged drought
Hydro-meteorological disasters have over many years dominated natural disasters in Indonesia, which is often flooded during rainy season and very dry and even extremely dry in certain regions during dry season.
— Antara

What’s Next for Indonesia-Turkey Defense Relations?
Earlier this week, a high-level representative from the Undersecretariat for Defense Industries in Turkey paid a visit to Indonesia.
— The Diplomat

Indonesia Battles Currency Woes
Policymakers in Indonesia are grappling to deal with a weakened currency, the rupiah, which was valued at just 14,930 per U.S. dollar last week — its lowest point since the 1998 Asian financial crisis.
— VOA

Is Indonesia the Next Emerging-Market Domino to Fall?
Investors who gorged themselves on Turkish delight and Argentine beef have had a rude awakening in 2018—the two countries are at the heart of a broadening crisis that has sent emerging-market currencies tumbling.
— The Wall Street Journal

Singapore’s Haze Law Faces Challenge in Indonesia
Indonesia’s complex rules on land use and the difficulty in prosecuting foreign businesses mean Singapore has its work cut out bringing companies to book under its new cross-border air pollution law.
— Scientific American

Garuda Still Suffers Losses Despite Changing Directors
There have been reports that Pahala Nugraha Mansury will be fired from his position as president of state airline Garuda Indonesia.
— Tempo

Garuda Business Class Passengers can Directly go on Helicopter Rides
Passengers of the Garuda Indonesia airline business class in the future will be able to take a helicopter ride owned by Whitesky Aviation or Helicity, through a collaboration agreed by the two companies.
— Netral News

Dogs and cats blow-torched alive at Indonesia ‘extreme’ market despite promised ban
Animal rights activists have urged the Indonesian Government to keep its promise to ban the brutal dog and cat meat trades, after shocking new footage emerged of the animals being bludgeoned over the head and blow-torched while still alive.
— ABC News

Indonesia’s SBY Government: ‘Vast Criminal Conspiracy’
The Indonesian government that left power in 2014 was a vast criminal conspiracy that stole as much as US$12 billion from taxpayers and laundered it through international banks, with as many as 30 officials in on the scheme, according to a massive 488-page investigation filed with the Mauritian Supreme Court last week.
— Asia Sentinel

Bomb Squad Probes Cause of Explosion at Darmawangsa Apartment
An explosion was heard from Tower 1 of Darmawangsa Essence Apartment at Kebayoran Baru on Tuesday, September 11, at around 14:45.
— Tempo

Jokowi welcomed with state ceremony in Vietnam
President Joko Widodo (Jokowi) and First Lady Iriana Joko Widodo were greeted with a state ceremony at Van Phong Chu Tich Nuoc`s Vietnam Presidential Palace in Hanoi on a visit to the country on Tuesday.
— Antara