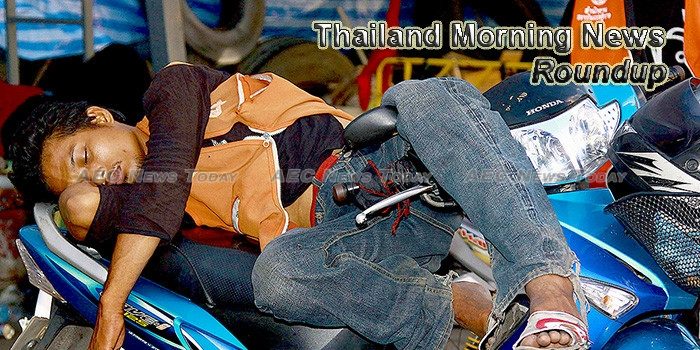 E-business tax to be levied in 2018
An e-business tax, a levy on any online transaction that takes place in Thailand regardless of the e-commerce operator’s location, is expected to come into force next year, says the Revenue Department’s chief.
— Bangkok Post

Khao Luang runoffs are gushing toward Nakhon Si Thammarat townships
Residents in Muang and Tha Sala districts of Nakhon Si Thammarat have been told by officials to brace for flooding after almost 400mm of rainfalls were dumped into the province, particularly in the mountainous Khao Luang area.
— Thai PBS

Revenue chief warns tax-evading SMEs
About 150,000 small to middling businesses currently evading taxes by keeping more than one set of account books, and using the doctored figures when filing their returns, have one month to fall into line, the Revenue Department chief warned on Thursday.
— Bangkok Post

Hotel growth expected despite snags
Hotel business is expected to grow by 5-7% this year despite being sluggish in several regions in October, says Supawan Tanomkieatipum, president of the Thai Hotels Association (THA).
— Bangkok Post

Thai property developer Habitat plans to mobilise funds via IPO in 2019
Habitat Group, a Thai developer of premium property, plans to raise up to 1.5 billion baht ($46 million) in its initial public offering (IPO) scheduled for the second half of 2019.
— DealStreetAsia

300,000 new SMEs targeted
The government plans to increase the number of small and medium-sized enterprises (SMEs) by 300,000 next year, as they are expected to play a major role in supporting the Thai economy, says Suwanchai Lohawattanakul, newly appointed director-general of the Office of Small and Medium-Sized Enterprises Promotion (Osmep).
— Bangkok Post

CIFS finds it difficult to conduct DNA test on Pakapong’s internal organs
The Justice Ministry’s Central Institute of Forensic Science (CIFS) has revealed that a special solution is being applied in conducting a DNA test on the internal organs of Pakapong Tanyakan, a first-year student of the Armed Forces Academies Preparatory School, since they had been kept in formalin for a long time.
— Thai PBS

Amazing Thailand VR brings ‘Discover Thainess’ to life
The Tourism Authority of Thailand (TAT) has launched a virtual reality ‘Discover Thainess’ campaign to harness the power of new media and provide potential visitors with an authentic Thai local experience even before visiting the country.
— TAT News