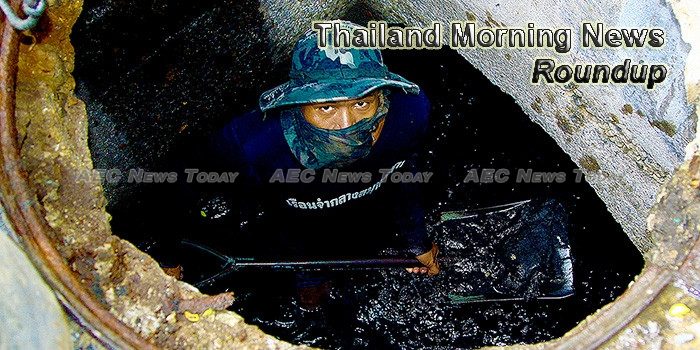 Auditor-General rejects complaints about rice sales
THE Office of Auditor-General has insisted that there have been no irregularities in recent sales of state-owned rice totalling 2.8 million tonnes as the government clears up its huge inventory resulting from the previous government’s rice-pledging scheme.
— The Nation (annoying popups)

PTT poised to gain from Myanmar deal
THAI and Myanmar officials will sign a memorandum of agreement at a meeting of Asean energy ministers next month that will take energy giant PTT a step closer towards a major gas project across the border.
— The Nation (annoying popups)

10,000 people likely to come for Yingluck ruling
Red-shirt activists expect to see up to 10,000 supporters of former prime minister Yingluck Shinawatra at the Supreme Court’s Criminal Division for Political Office Holders on August 25 despite strong security measures and the government’s advice against such a gathering.
— Eleven/ The Nation

PM calls for crackdown on all forms of corruption
The Prime Minister has called on related agencies to remove corrupt practices from Thai society.
— NBT World (video)

Flooding continues to afflict eight provinces
Flooding remains in eight provinces, mostly in the Northeast, and has affected 1.8 million people and damaged 3.9 million rai of farmland over the past month.
— Bangkok Post

As Thailand’s corporate cash pile swells, investors grow restless
Thai companies have accumulated a record $34 billion in cash, prompting some investors to demand companies from oil producers to food suppliers consider deals to put the money to work – or hand it back to shareholders.
— Reuters

Clouds of war hang over economy
THAILAND could face a delayed economic recovery plus disruption to exports, investment and tourism should North Korea-US tension escalate into a full-fledged war, market analysts warned.
— The Nation (annoying popups)

Machine learning can benefit all start-ups
EVERY STARTUP should pay attention to artificial intelligence and machine learning because the technologies will enable them to take solutions and scale them at a speed they have never had before, according to Roy Glasberg, Google’s global lead for Accelerator and AI programmes for start-ups.
— The Nation (annoying popups)

Baht strength holding back trade
The baht has surged against the US dollar to be the best-performing currency in Asia this year, prompting a growing outcry among exporters fearing that foreign exchange pressure will be a hurdle for ththem to sell products.
— Bangkok Post

Mud-Splattered Thai University Student Highlights Asean’s Education Challenges (video)
In Asean countries there are many obstacles children have to face in an attempt to gain a proper education – distance to schools, tuition costs, under-qualified teachers, inadequate and poorly resourced classrooms, and so on. The list is endless.
— AEC News Today (video)

Thailand aerospace industry overview
With the fast growth of air traffic, the aerospace industry of Thailand is pushed forward and anticipates good prospects for the coming years. Thailand’s airports, airlines, maintenance, repair and overhaul services and manufacturing businesses are all benefiting from this upward trend and encouraged by the authorities.
— Asean Up

Vietnam Morning News For May 28