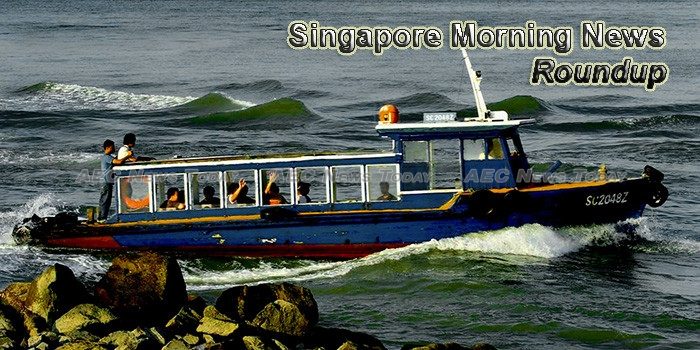 Persecuted Singapore blogger free in America
Teen blogger Amos Yee is finally a free man in the United States after a three-member panel at the Board of Immigration Appeals ruled unanimously to grant him asylum, making him the first Singaporean in years to receive political refuge in the West.
— Asia Times

Singapore’s competitiveness: The good, the bad and the ugly
SINGAPORE remains one of the world’s most competitive economies across the board. Period. But if you prefer to nitpick, let’s do that (too).
— The Business Times

78% of CPF investors made returns higher than OA interest rate in FY2016
The latest numbers are based on a new calculation method which includes unrealised profits or losses.
— Channel NewsAsia (video)

Cases of abuse against Home Team on the rise; Shanmugam vows action
There were 484 cases last year — or more than one a day — of Home Team uniformed officers being physically or verbally abused, revealed Home Affairs and Law Minister K Shanmugam yesterday, as he vowed to take action against such unacceptable behaviour.
— Today Online

Black Uber driver bullied online is Singapore PR who has been here for 15 years: Uber clarifies
Private-hire vehicle service facilitator Uber has clarified that the black driver captured in a viral video that circulated in several social media platforms this week is a Singapore permanent resident who has been living in Singapore for the last 15 years.
— The Independent Singapore

Many recipes but Singapore’s cashless appetite still not sated
TOO many cooks are spoiling the broth in Singapore’s pursuit of a cashless society. Competition among e-payment players will improve user experience, certainly, but Singapore does not need another new e-wallet; it needs a standardised Quick Response (QR) code or Point-of-Sale (POS) terminal, observers tell The Business Times.
— The Business Times

This Teenager Was Jailed For Being Critical of Singapore. The U.S. Just Upheld His Bid for Asylum
A teenage blogger from Singapore was released from U.S. custody on Tuesday following an immigration appeals court’s decision to uphold his bid for asylum.
— Time

Hydrogen a more sustainable bet for Singapore’s energy future — Jason Tan Han Wei
The government recently announced big steps forward in Singapore’s renewable energy future, it intends to install solar panels across all new Housing Development Board blocks, with costs of installation about 40 per cent less than before.
— The Malay Mail Online

NCSS and CHAT challenge the Singapore marketing community to help destigmatise mental health at Do It Day 2017
Singapore government department National Council of Social Service (NCSS) and Institute of Mental Health (IMH) programme Community Health Assessment Team (CHAT) have partnered with The Drum to bring together the hive mind of the Singapore creative community in destigmatising mental health.
— The Drum

Yotel to expand to Singapore with $250m strategic investment from Starwood
Starwood Capital Group has committed to invest $250 million for a 30 per cent stake in Yotel, a affordable hotel chain.
— DealStreetAsia

Vietnam Morning News For May 12